Three things the Springboks need to do to stay competitive

Because let's face it, they're not going to beat the All Blacks in Wellington on Saturday... 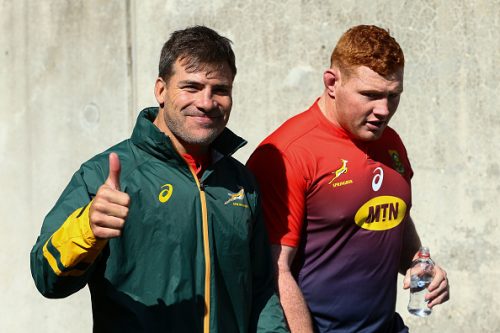 Let us be honest.

The Springboks won’t be winning their Rugby Championship match against the All Blacks in Wellington on Saturday, regardless of what New Zealand coach Steve Hansen says.

Instead, a dignified performance will go a long way towards giving the Boks some confidence for the final stretch of the campaign at home.

Here are the three things Rassie Erasmus’ men need to do to be competitive this weekend.

Be aggressive at the set-pieces

After all, men like Steven Kitshoff, Malcolm Marx and Pieter-Steph du Toit could easily make the All Black side.

Furthermore, there’s still more than enough evidence that the New Zealanders are rattled when they’re consistently put under pressure physically.

A solid scrum and lineout not only ensures the Boks better ball to work with, it’s a vulnerable area of the All Blacks’ play and is a way to score points.

Score as much points as possible early

The All Blacks rarely start like a house on fire, especially at home.

It’s because of their unparalleled ability to increase their tempo in the last 20 minutes of matches.

The Boks can’t be expected to compete on that front.

But what they might do is take advantage in the first half and build a sufficient buffer that might make it really awkward for the world champions to overturn that deficit.

In fact, even in last year’s record 57-0 loss in Albany, the Boks actually started the first half quite well and could’ve been in a better position – on the scoreboard and mentally – had they taken their chances.

If they’re going to limit the damage in Wellington, they need to be better in that department.

South Africa will need Siya Kolisi and his senior men to make prudent decisions in the heat of the moment, especially when there’s an opening or if it seems as if everything might unravel.

Sometimes, just a bit of calmness goes a long way.

'This means more': Siya Kolisi sends a shoutout to his three-year-old fan
5 hours ago
5 hours ago

Savea commits to All Blacks, ditches code switch
6 hours ago
6 hours ago

'This means more': Siya Kolisi sends a shoutout to his three-year-old fan
5 hours ago
5 hours ago

Savea commits to All Blacks, ditches code switch
6 hours ago
6 hours ago