Heartbreak for Springboks as All Blacks burgle a win

The world champions show once again that they're never out of contention with a magnificent comeback against a worthy home side. 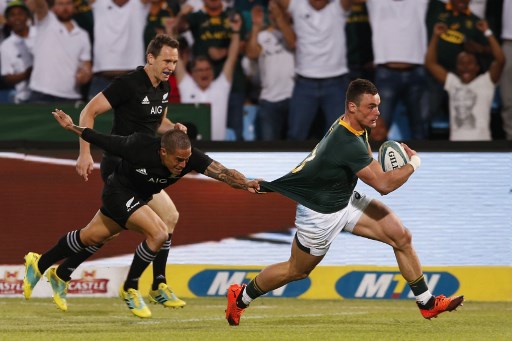 The All Blacks showed their class and duly exacted revenge for a loss in Wellington but if there was any doubt over the Springboks’ renaissance, there can be no doubt.

In a magnificent game of rugby, New Zealand exploited the hosts’ errors at the death to nick a 32-30 win at a jam-packed Loftus on Saturday evening.

Patient, powerful rugby had seen the Boks establish a healthy 30-13 lead going into the final quarter as they once again rattled the No 1 side in world rugby, but they did lack composure and concentration in losing their discipline in the last 15 minutes.

And that’s all the All Blacks, who were very much out of it for most the match, required to save their day as they showed immense ruthlessness in taking every point on offer.

While no tries were scored in the first half as the teams were deadlocked 6-6 at the break, the game was ripped open by two tries from the Boks.

From there on, it truly was a spectacle … even if it ended in disappointment for Rassie Erasmus’ troops.

Bok hooker Malcolm Marx was immense on the ground, winning at least two turnovers in the first half and another crucial one just after halftime. But it was his steal in the 29th minute on the Boks goal-line with the All Blacks looking ominous that personified his presence in the pack. He was robust as ball-carrier too.