With Faf de Klerk released for club duty, coach Rassie Erasmus selects the replacement most likely to play a similar game to him. 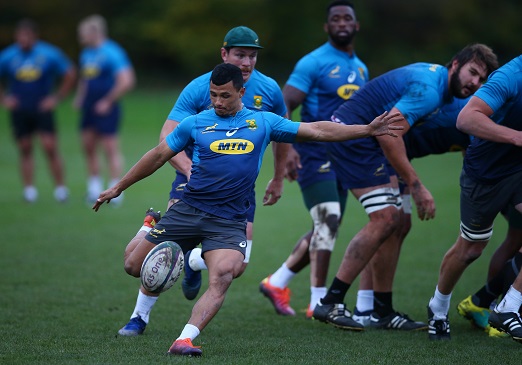 Young Embrose Papier’s patience on the fringes of the Springbok team was finally rewarded on Thursday after being selected as the starting scrumhalf for Saturday’s Test against Scotland at Murrayfield.

It’s been an interesting year for the 21-year-old.

Throughout the season, the raw but exciting halfback had been picked on the substitutes benches for his respective teams.

It became so weird later on that he would be in a Boks match-23 and still be a number two for the Bulls.

Nonetheless, it seems a promising cameo two weeks ago against England, where he displayed some snappy service similarly to the released Faf de Klerk, was enough to convince Erasmus to hand him his chance.

Meanwhile, Erasmus reverted to a more traditional loose trio, which seemingly maximises the strengths of both Duane Vermeulen and Pieter-Steph du Toit.

“Moving Duane and Pieter-Steph around in the pack isn’t disrupting at all, as both of them are very experienced and have played for us in these positions earlier in the season,” said the national coach.

With Eben Etzebeth still not having recovered from a foot injury, the lanky RG Snyman will slot into the starting line-up.

It’s debatable, however, how match-fit replacement lock Lood de Jager will be.