Swys de Bruin's troops' Super Rugby campaign is back on track, but both them and the Jaguares will feel their play lacked a bit of substance. 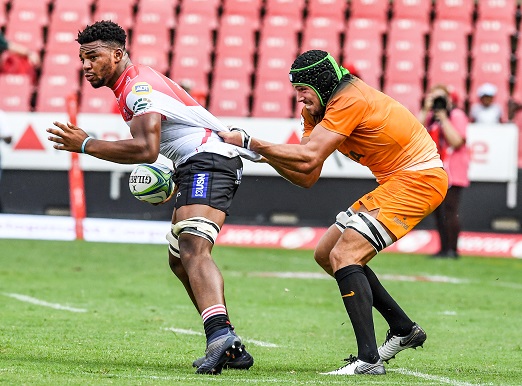 Vincent Tshituka of the Lions with possession challenged by Guido Petti of the Jaguares during the Super Rugby match between Emirates Lions and Jaguares at Emirates Airline Park on March 09, 2019 in Johannesburg, South Africa. (Photo by Sydney Seshibedi/Gallo Images)

A youthful Lions side showed fantastic intent and enthusiasm to get their Super Rugby campaign with a 47-27 win over Jaguares on Saturday.

Coach Swys de Bruin’s gambit of picking eight rookies in the match squad was handsomely rewarded as they, at times, almost played the Argentinians off the park.

The hosts were full value for their victory, but the youthful zest also meant they slacked off in the closing stages, allowing the Jaguares to snatch a bonus-point away from them.

Given how the Lions rediscovered their hunger for tries, it was probably unfair to single out individuals.  Young centre Wandisile Simelane was superb on attack and wing Courtnall Skosan, who scored a brace of tries, was an experienced presence, but the general was flyhalf Elton Jantjies, who got his backline to fire again with great decision-making and composure.