Dan du Plessis: My dad talks too much, but he cares

The Stormers centre is a member of one of SA rugby's biggest dynasties, but he doesn't want to be burdened by his father and uncle's fame. 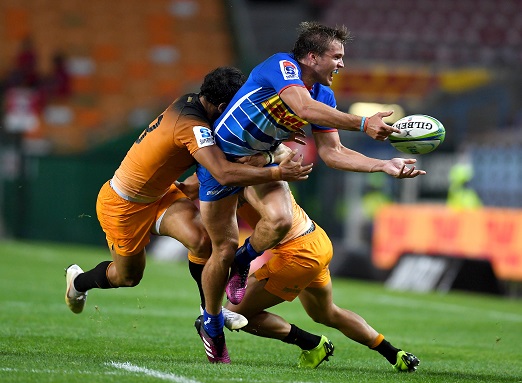 Dan du Plessis of the Stormers offloads in the tackle during round 5 of the Super Rugby match between DHL Stormers and Jaguares at DHL Newlands on March 15, 2019 in Cape Town, South Africa. (Photo by Ashley Vlotman/Gallo Images)

There have been a few family dynasties in South African rugby, but you’d struggle to find a bigger one than the Du Plessis.

During Western Province’s golden era in the 1980s, Carel and Michael were revered for their respective roles.

Carel’s nickname, the Prince of Wings, says everything that needs to be said about his pedigree.

Brother Michael, two years older, was more a subtle, mercurial talent, but it didn’t necessarily mean that he was overshadowed.

When it comes to Michael’s son, Dan, however, there’s a fair argument to be made that the 24-year-old midfielder is, perhaps, still languishing in the shadow of the dynasty.

Yet the Stormers rookie seems to prefer it that way, which isn’t quite surprising given the stop-start nature of his career to date.

A rash of injuries tends to give one perspective.

It also explains, tongue firmly in cheek, why Dan tends to become a bit bored with his dad’s “tales” on the game.

“Sometimes my dad talks a bit too much about his own career,” he said, laughing.

“And then I get a bit upset with him and tell him to keep quiet for a bit. I’m going on my own path, I’m not following in his footsteps. I am just trying to make my own path and own career.”

Du Plessis is practical enough though to know that he shouldn’t merely shrug off his father’s insights.

“He’s obviously had a massive impact on my career. He gives me a lot of feedback‚ which is mostly positive. He doesn’t try to put any negativity on me. I have learned a lot from him,” he said.

Acknowledging that he’s “in best shape (I’ve) been in the past two years”, Du Plessis now just wants to focus on a extended run of games.

And he’s certainly going to need his newfound strength and experience to tame the Hurricanes’ midfield on Saturday in Wellington, which perhaps explains why Stormers mentor Robbie Fleck on Thursday decided to rather use him as impact player off the bench.

“In terms of direct opposition‚ this is my toughest challenge. We’ll be up against a number of All Blacks and world-class players like Beauden Barrett and Ngani Laumape,” said Du Plessis.