New Bok ‘Bomb Squad’ member Elstadt: ‘My role is to climb in’

“It’s an honour for me; it’s called the "Bomb Squad" for a reason and us guys coming off the bench have an important role." 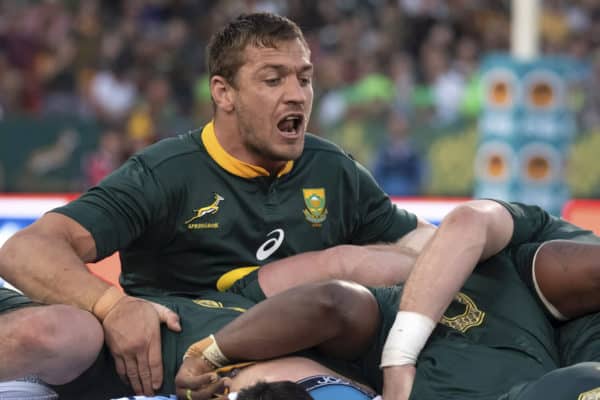 Utility forward Rynhardt Elstadt says he is greatly honoured to be part of the Springbok “Bomb Squad” and when he comes off the bench in the first Test against the British and Irish Lions in Cape Town on Saturday he and his fellow replacements will be chasing even greater intensity and physicality.

But with several backline players having question marks over their fitness, coach Jacques Nienaber has gone with a standard five-three split on this occasion. Their instructions will be the same though, according to Elstadt, who narrowly missed out on the squad that triumphed in Japan two years ago.

“It’s an honour for me; it’s called the “Bomb Squad” for a reason and us guys coming off the bench have an important role,” Elstadt said.

“We need to raise the intensity of whoever we are replacing and we need to bring more physicality. I hope I live up to the standard and do even more, and I just don’t want to drop my team-mates.

“I like the physical side of the game, and it’s not just myself in the team who likes that. My role when I come on is to climb in. I’m not a particularly big ball-carrier, but my job is to do the donkey work to make sure we get good ball and also to stop the opposition’s momentum.”

The 31-year-old Elstadt, who will earn his third cap on Saturday, has the responsibility of covering both loose forward and lock, especially with specialist lock replacement Lood de Jager having not played any rugby since April and having tested positive for Covid at the start of the month.

Other rookies in the Springbok squad who have key roles are Ox Nche and Kwagga Smith.

Nche, who has also just played in two Tests previously, will start at loosehead prop against Tadhg Furlong, the Irishman who many rate as the best tighthead prop in the world. While Nche’s greatest assets are probably in open play, and mobility is also going to be very important against this Lions team, his first job is to ensure a steady scrum for the Springboks.

Smith replaces the injured Duane Vermeulen at eighthman and, as much as Nienaber said the mobile 25-year-old could do the same job in terms of getting and stopping momentum as the World Cup final man of the match, there is little doubt the former Springbok Sevens star has been picked to use his pace and ball-hunting skills to counter the Lions in the wide channels.