Third Test against Boks will be ‘a cup final’, says Gatland

Springbok coach Jacques Nienaber said his team could get better. 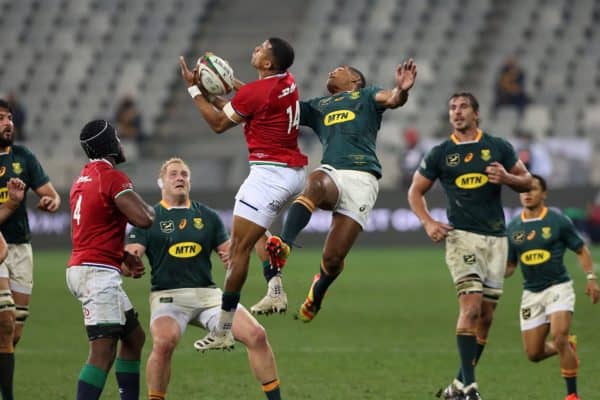 Anthony Watson of the British & Irish Lions catches the ball in the air during the second Test against the Springboks in Cape Town on Saturday. Picture: EJ Langner/Gallo Images

British and Irish Lions coach Warren Gatland believes next Saturday’s third and final Test against the Springboks will be like “a cup final”.

Speaking after the Springboks levelled the series with a 27-9 win in Cape Town on Saturday, Gatland admitted his team had been outplayed in the second half, when they conceded 21 points without reply.

“We just didn’t get anything,” said Gatland. “We didn’t get any momentum, any real opportunity to play. In fairness to them, they scrummaged pretty well, they drove a lot and got some reward.

“There are a few things we’ve got to tidy up. It’s 1-1. South Africa put a huge amount of emotion into that game but we’ve got a chance next week to hopefully tie the series up.”

Springbok coach Jacques Nienaber said his team could get better.

He believes the Springboks are building towards the standard they set when winning the 2019 Rugby World Cup.

Nienaber said the Springboks, hit by Covid-19 infections in the first Test build-up, had been able to have only two full weeks of training since the full squad assembled on June 26.

“There is still a lot we can improve on.”

Saturday’s match came after a week of controversy during which South African rugby director Rassie Erasmus criticised the first Test match officials in a 62-minute video.

“The last thing we need is a war of words,” said Gatland. “Hopefully, World Rugby will make sure that everyone follows the protocols.”

The Lions coach said he was surprised how “the narrative changed” when he was accused of complaining about the appointment of South African Marius Jonker as the TV match official.

“I didn’t make one comment on the TMO and yet I was accused of questioning his integrity.”

Nienaber said the Springboks were unaffected by the Erasmus drama.

“Rassie as director of rugby had something on his heart. That’s off-field stuff. We as a team knew we had to focus on rugby.”

ALSO READ: Springboks hit back in style to square series against Lions

Nienaber praised his players for recovering from the first Test loss.

“We’re fortunate with the leadership group we’ve got, players with that amount of experience.

“Last week, we lost the kicking game in the second half and the plans the players came up with to rectify it were unbelievable.”

Both 40-minute halves took more than an hour to complete, and Gatland said “they did a good job of slowing the game down. It was frustrating for us because we couldn’t get any rhythm.”

Gatland was asked whether he thought Springbok winger Cheslin Kolbe was lucky to be given only a yellow card for taking out Conor Murray in the air.

“I’m not going to comment on the referee,” he said. “We’ll have our meeting with the referees this week. It didn’t look great from where I was but he decided it was a yellow card.”

Nienaber said it was the right call: “The proper decision was made.”

“The assessment will come in the next 48 hours,” said Nienaber regarding a shoulder injury to 2019 world player of the year, flanker Pieter-Steph du Toit, that forced him to retire on 22 minutes.