There appeared to be unhappiness in the Lions camp that a South African had been picked to serve as the TMO in the series. 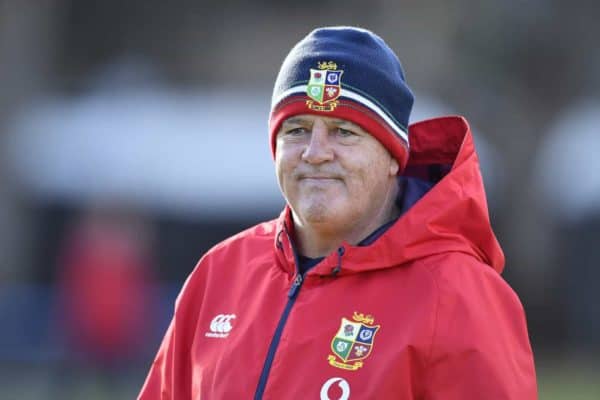 Lions coach Warren Gatland is upset he and the tour party has been dragged into the disciplinary matter against Boks boss Rassie Erasmus. Picture: Picture: Ashley Vlotman/Gallo Images

British and Irish Lions coach Warren Gatland said on Tuesday he was “disappointed” with a World Rugby statement which linked the Lions to disciplinary action against South African director of rugby Rassie Erasmus.

In announcing that an independent panel would look into possible breaches of World Rugby’s code of conduct by Erasmus, the controlling body stated that it condemned public criticism of match officials.

Erasmus released a 62-minute video last week, highlighting what he believed were mistakes made by the match officials during the first Test, which the Lions won 22-17.

World Rugby said in a statement on Monday that it was “concerned that individuals from both teams have commented on the selection and/or performance of match officials”.

Gatland said during a press conference after announcing his team for the third Test against the Springboks on Saturday, “We’ve got kind of inadvertently dragged into it. We’ve tried to maintain as much integrity as we can.

“I’m really disappointed with the statement saying both sides have been making comments and have been critical of the officials.

“I’d like someone to show me where we have done that. We’ve looked through everything and we can’t see any instances. In fact, we’ve praised the officials.”

Gatland said all the Lions had done was question why no contingency plan was in place to provide for back-up officials.

South African Marius Jonker replaced Brendon Pickerill as the series TV match official when the New Zealander could not travel because of the coronavirus pandemic.

“We found out on the Wednesday night before the first Test,” said Gatland. “We only found out subsequently that World Rugby had known for at least a week or so that there was a possibility that he wasn’t going to be travelling to South Africa.”

Gatland said the Lions had asked World Rugby why they hadn’t been notified earlier and why there was no contingency plan.

“There’s never been any question of the integrity of the people involved, what we questioned was the process.”

Gatland said he believed that a Lions tour was second only to the World Cup on the world rugby calendar.

“You don’t want to be in a position where any of the match officials can be potentially criticised or questioned and we’ve already had that.”