Gatland said the number of stoppages in last week's match had been frustrating. 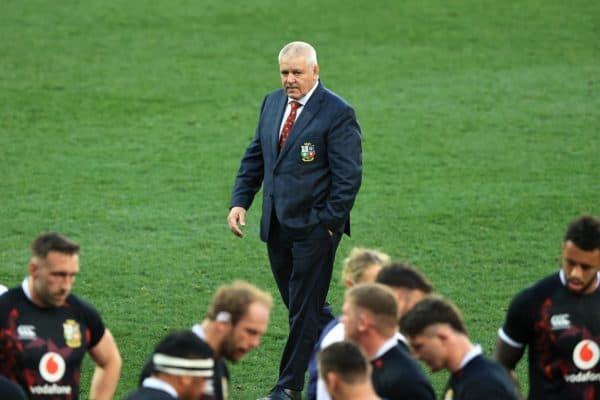 Warren Gatland will be in charge of the Lions for potentially the last this weekend. Picture: David Rogers/Getty Images

British and Irish Lions coach Warren Gatland said on Tuesday he would be speaking to the referees about ensuring a faster tempo to this weekend’s series-deciding third Test against South Africa in Cape Town.

Gatland announced six changes to his starting team after the Lions were beaten 27-9 by the Springboks at the same venue last Saturday.

Four of the changes were in the backline and two among the forwards, with Gatland admitting that the Lions had lost the aerial battle in the second Test.

Prop Kyle Sinckler will be among the replacements this Saturday after being found not guilty as an independent disciplinary hearing probed allegations that he bit Springbok lock Franco Mostert last weekend.

Asked whether the Lions would change their approach to a match which Gatland has previously likened to a cup final, the coach said: “We definitely want to play some more rugby.”

Gatland said the slow tempo of last Saturday’s match, which lasted 126 minutes, had been frustrating and contributed to the Lions being unable to impose themselves.

“We felt like (at) every scrum there was an injury, slowing the game down. There was something like 14 minutes of TMO (TV match official). It was really, really stop-start.

“That made it frustrating for us. We want to keep the tempo of the game up, to get a flow.

“South Africa at the moment don’t want to do that. (Captain) Alun Wyn Jones was talking to the referee on a number of occasions about keeping it going.

“We had stud changes, we had TMO decisions, we had the referee stopping the game for cramp. So that will be one of the things that I will talk to the referees about this week. We can’t have 60-odd minute halves.”

Wales’ Liam Williams and Josh Adams will play at full-back and right wing respectively, with Scotland’s Stuart Hogg and England’s Anthony Watson both dropped from the matchday 23.

Bundee Aki will team up with fellow Ireland centre Robbie Henshaw in midfield, with Chris Harris, who started last Saturday, left out of the match squad.

Scotland scrum-half Ali Price, who started in the first Test and was a replacement last Saturday, will change roles again with Ireland’s Conor Murray, who drops to the bench from a starting role.

Both changes in the forwards are in the front row, with Wales pair Wyn Jones and Ken Owens coming in at loosehead prop and hooker respectively.

Three players who have not appeared in the series, forwards Adam Beard and Sam Simmonds as well as fly-half Finn Russell are among the replacements and in line to win their first Test caps for the Lions.

A surprise omission was England captain Owen Farrell, who can play centre or fly-half.

Gatland said Scotland playmaker Russell, who has recovered from an injury suffered early in the tour, “offers something a little different.”