The Springbok youngster has basically taken over the role fulfilled by the two-time World Cup winner. 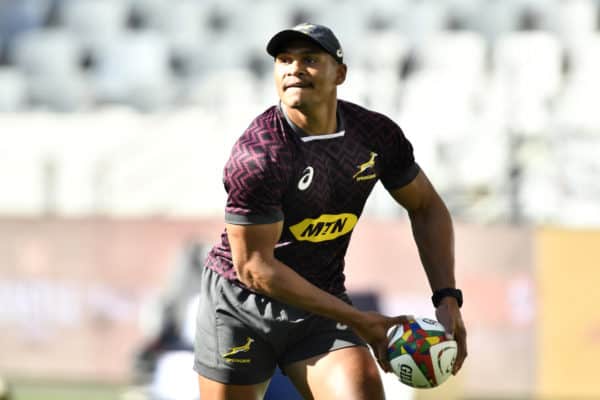 Damian Willemse has spoken about how veteran Frans Steyn and other senior Boks have helped him in the national set-up. Picture: Ashley Vlotman/Gallo Images

It must have been a big call for coach Jacques Nienaber to bin Francois Steyn from his match-day 23, given the utility back’s tremendous experience and vital role off the bench in the World Cup triumph. But young Damian Willemse has given no reason for the Springbok management to rue that decision.

The 23-year-old has featured in the last five Tests, four of them as a replacement, while he started at fullback in the opening Rugby Championship match against Argentina. Willemse himself on Friday acknowledged how lucky he felt to be preferred over the more experienced options available to Nienaber, and he also praised Steyn for being so helpful to him.

“There are a lot of quality players who are missing out on the 23 – guys like Frans Steyn, Jesse Kriel and Morne Steyn, who all have more than 40 caps. So I feel very fortunate to make the playing squad,” Willemse said from the Gold Coast, where the Boks are preparing for the away matches in the Rugby Championship, on Friday.

“I’ll be happy to continue my run of playing and I’m looking forward to the next four weeks in Australia. The coaches’ trust in me is a big thing for me.

ALSO READ: Boks prepping for Rugby Champs: Five areas where they can improve

“I’ve been training with Frans and he’s always so calm and communicates well, I’m really enjoying it. He helps the youngsters a lot, Morne and Jesse too. Aphelele Fassi and I are always learning from them.”

Although Willemse has also been earmarked as a back-up inside centre, Damian de Allende has been so commanding in that position that the Stormers star has almost entirely featured at fullback in the Green and Gold this season.

That is one of the decision-making positions for the Springboks and Willemse said although he is working hard on his game-management skills, it has not been a case of him having to temper his normally adventurous approach.

“We have a specific plan, the way Willie le Roux manages play. We want to force pressure on the opposition and turn the ball over to get our wings in the game and scoring their brilliant tries,” Willemse said.

“It’s about playing smart rugby and not making as many errors, especially the decision-makers. I had a conversation with Aphelele today about how small the margins are at this level.

“The smallest mistake can cost you five or seven points, and we know Australia and New Zealand have a lot of skilful backs in their armoury.

“I’ve been working very hard with Mzwandile Stick (backline coach) on the high balls and my game-management at fullback. I’m enjoying the challenge.”