‘Business as usual’ for Boks – even with Erasmus absent in Oz

“We operate a bit differently to the usual director of rugby/coach relationship because we are not confined by job titles." 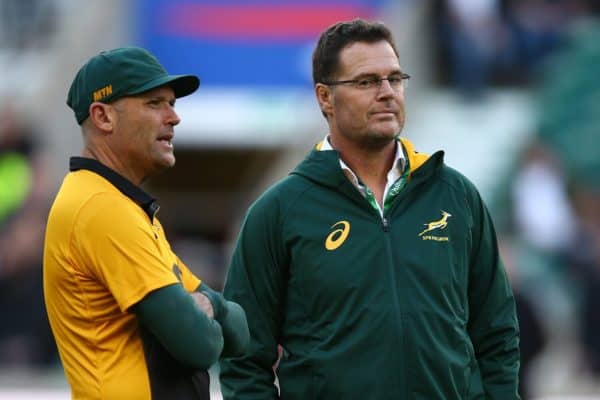 Jacques Nienaber and Rassie Erasmus have a unique working relationship, that has benefitted the Springboks. Picture: Getty Images

Rassie Erasmus may not be in Queensland with the Springboks, but it is business as usual for coach Jacques Nienaber and his unusual relationship with his director of rugby when it comes to coaching the South African rugby team.

Erasmus is back in South Africa still waiting for a date to be set for his misconduct hearing after World Rugby took exception to the 62-minute long video that he made pointing out all the refereeing mistakes made in the first Test against the British and Irish Lions.

The former Springbok loose forward has had a far more hands-on relationship with the team than other directors of rugby around the world, who tend to be paper-pushers in plush offices.

“We had a conversation 10-15 minutes ago, so life goes on as per normal,” Nienaber said on Wednesday when asked at the team announcement whether he was missing Erasmus.

“We operate a bit differently to the usual director of rugby/coach relationship because we are not confined by job titles. We don’t work like that. We know we have certain responsibilities, the team understands how that works, and even with the assistant coaches, we all have input in each other’s responsibilities.

“The one positive of Covid is that technology has made the world very small – you can be in someone else’s living room in 10 minutes. Rassie has flipped his day and night around to fit in with our schedule and sometimes he’s in our team meetings, he’s a part of us whenever he can join in. So it’s business as usual. He was also not with us for the first Test against Argentina.”

The last time the Springboks were in Australia was in Septmber 2018 when they lost 23-18 to the Wallabies in nearby Brisbane. They made many dumb mistakes that day, looked one-dimensional and sorely lacking in confidence.

In the week after that stuttering display, Erasmus said he did not expect to keep his job if things then went badly against the All Blacks in Wellington the following week. But South Africa won in New Zealand for the first time since 2009, to the astonishment of everybody.

But back then they were still emerging from their years in the wilderness and have gone from strength-to-strength since.

ALSO READ: Vermeulen, De Klerk back for Boks; Kolbe out of Wallabies Test

“Last time we were in Australia, it was our sixth game working together with Rassie. From then a lot of things have been implemented,” Nienaber said. “We installed a new defensive system in 2018 which the players were still getting used to, and they were finding their feet in terms of playing style.

“We’re now a lot more settled, we’ve been together for quite a few Tests now. We’ve only lost a handful of players since then, so our continuity has been good. We’re a lot more aligned – that’s the good difference between us then and now.”