Kolisi: ‘Boks will throw everything into this Wallabies game’

The South Africans know they have to win on Saturday to stand a chance of defending the Rugby Championship title. 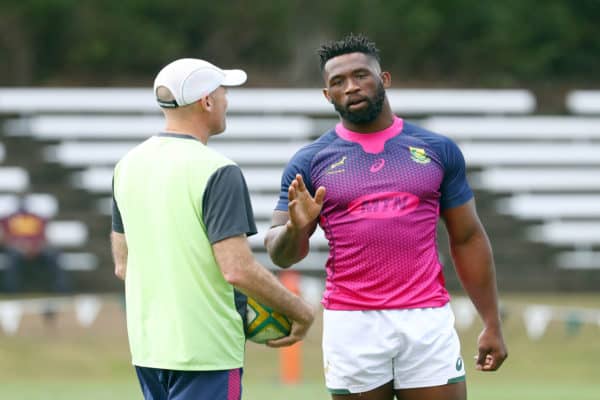 Captain Siya Kolisi said on Friday that the Springboks have been measured by themselves and they found themselves wanting in last weekend’s defeat to Australia, which is why they will be running out with great determination to rectify that when they meet the Wallabies again in a Rugby Championship Test at the Suncorp Stadium in Brisbane on Saturday.

South Africa went down 26-28 to Australia last weekend in an unfocused, error-strewn and ill-disciplined performance.

Kolisi said the world champions and the team clinging on to the number one ranking under pressure from the All Blacks know they are much better than what they showed on the Gold Coast.

“We know exactly where we went wrong, it was very upsetting to lose like that,” Kolisi said Friday.

“The mistakes we made with things that are normally a given; it was so tough to see that on the review. They were simple errors.

“Just on the day, we were not at our best in the physical part. We have our standards, but we made fewer tackles and especially less dominant tackles, Australia dominated their hits with ball-in-hand.

“We compared ourselves to how we played against Argentina and the British and Irish Lions and the standard was definitely not the same.

“We need to make that better first before we complain about anything else. So we are going to be more determined on Saturday to bring what we did not show on the field last weekend.”

ALSO READ: Boks ready to ‘smash’ Wallabies as they search for momentum

To make matters tougher, the Springboks have a very disappointing record in Brisbane.

Since the return from isolation, South Africa have won just once there in 12 attempts against Australia. Kolisi, along with Willie le Roux, Eben Etzebeth and Duane Vermeulen, is one of the players who featured in that memorable 38-12 hammering of the Wallabies in 2013.

“We’ve only won once at Suncorp and we want to change that, but the most important thing is for us to stay in the competition and defend the Rugby Championship,” said the Bok leader.

“So we are going to throw everything into this game. We’ve spent the week asking ourselves why we did not get to where we are meant to be in the previous game and I’m confident we will pitch up this weekend.

“Winning is what we care about, that’s the only way we can maintain our number one ranking. But the ranking is not our focus, we want to get back into the competition and give ourselves a chance of winning it again.

“But if we’re not disciplined then we won’t get the result we want.”

Salmaan Moerat on his neck injury, his return to play and his Bok chance
22 mins ago
22 mins ago

Salmaan Moerat on his neck injury, his return to play and his Bok chance
22 mins ago
22 mins ago