"You don’t want to have too many of the one kind of player." 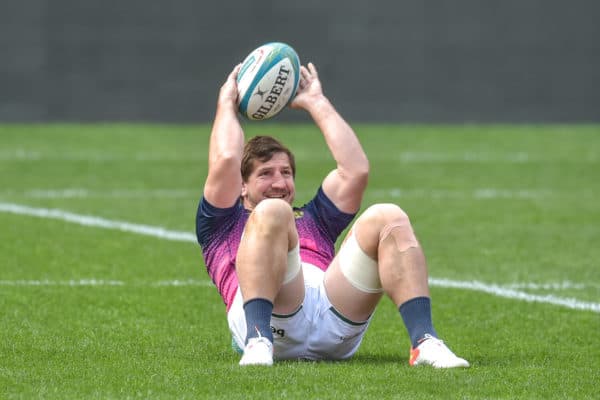 Kwagga Smith has taken the place of Franco Mostert in the starting team of the Springboks for the Test against the All Blacks on Saturday. Picture: Christiaan Kotze/Gallo Images

Coach Jacques Nienaber said on Tuesday that the Springboks need to return to their “soul”, and one of their usual strengths they have sorely missed over the last fortnight has been physical dominance on the gainline.

The South African team is known for massive ball-carries and bone-crunching defence, both of which were strangely absent from their defeats against Australia.

So when the decision was made to give hardworking utility forward Franco Mostert a break and play him off the bench, with fit-again Lood de Jager starting, in Saturday’s Test against the All Blacks in Townsville, it was surprising that the Springboks did not take the opportunity to play a big ball-carrier at blindside flank (such as one of the Du Preez twins), instead opting for the pace and Sevens skills of Kwagga Smith.

Nienaber explained on Tuesday that this particular selection was a balancing act.

“If you want to get a result against New Zealand then you have to test them in various areas,” Nienaber said.

“Physicality is obviously one area we enjoy, but you can’t only bring physicality, you need to test them in more than one department. You have to look at the balance of your pack and weigh up ball-carriers against players who can cover width and scramble for you.

“We have a lot of strong ball-carriers in the pack and Kwagga can carry in a different way with his evasion skills and timing of his carries, he brings those Sevens skills. You don’t want to have too many of the one kind of player.

“Franco has been a real stalwart for us this season, playing 80 minutes after 80 minutes, and moving him to the bench is purely to give him a bit of a break.”

The Springbok backline has also missed some cutting thrust, and Nienaber has looked to boost that department by returning to a 5-3 bench, with Elton Jantjies and Francois Steyn recalled to the matchday squad.

While the Springboks tried to go wide more often last weekend (against Australia), they were not direct enough to create space for their wings and Jantjies is adept at playing flat and getting his backline away, while Steyn can hopefully make big metres across the gainline.

“What Australia did really well was beat us with our own game, they changed completely from how they had played in the games against France and New Zealand,” Nienaber said. “We probably got caught up in that a little and played twice the amount of rugby that they did.

“We probably pushed things a bit, but we need to play when it’s on, when the opportunity is there. We forced a few carries.

“The pressure from ourselves as a team is probably more than what the public put on us. We are all – coaches, management and players – in it together and we have been open and honest with each other, we can talk straight up with each other. We take the criticism, it is tough to swallow, but I would worry if there was no criticism – it shows that people feel something for the team.”

Nienaber: UK tour will be like Springboks v Lions — Part 2
8 hours ago
8 hours ago

Nienaber: UK tour will be like Springboks v Lions — Part 2
8 hours ago
8 hours ago