"We are playing New Zealand and we will go out and give it our best whatever the occasion." 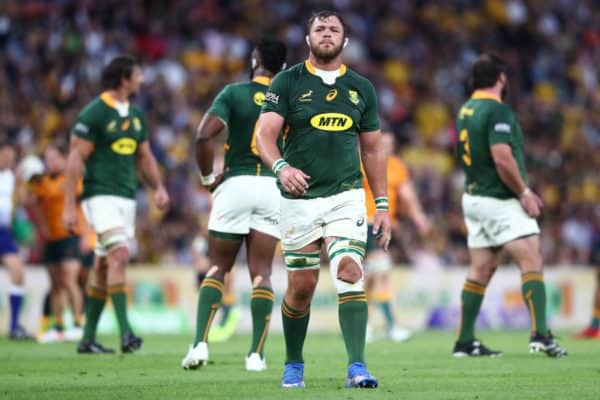 Springbok No 8 Duane Vermeulen says this weekend's 100th Test against the All Blacks is 'just another game.' Picture: Chris Hyde/Getty Images

Given the great rivalry that exists between the two teams, it would be stupid not to expect the Springboks to find some extra motivation against the All Blacks in Townsville on Saturday, especially since it is the 100th Test between the only two sides to have won the World Cup three times.

But, South Africa’s veteran eighthman Duane Vermeulen said on Tuesday that he was approaching the milestone fixture as just another international.

Given their unfocused displays in the last two matches against the Wallabies and Vermeulen’s slow return to full fitness after ankle surgery, it is understandable that the 35-year-old does not want to be distracted by any of the fanfare this week.

“We will take it as just another Test match; yes, it’s the 100th match against the All Blacks, but we want to compete in the Rugby Championship and try and still win that competition,” Vermeulen said on Tuesday.

“We are playing New Zealand and we will go out and give it our best whatever the occasion; the fact that it is the 100th Test is for the people who write books.

“We can only talk about the ‘now’, the past has gone but we just want to improve on last week. New Zealand play a whole different style of rugby to Australia and we have got to prepare accordingly.”

Since the first Test between the teams – coincidentally also 100 years ago on 13 August 1921 in Dunedin (NZ won 13-5), the All Blacks have won 59 times and South Africa have 36 wins, with four matches drawn. But since the return from isolation in 1992, the Springboks have only won 16 of 62 Tests.

Nevertheless, South Africa are still New Zealand’s greatest rivals with the highest winning percentage (36.4%) against them of all opposition. Due to the travel restrictions imposed by Covid, this match is being played in north-eastern Queensland.

The Springboks and All Blacks have met at a neutral venue on four occasions, all of them during World Cups, and South Africa’s only win came in Cardiff in 1999, 22-18.

South Africa need to beat New Zealand in successive matches for the first time since winning three in a row in 2009 to regain the Freedom Cup, which the All Blacks took off them in 2010.

Brodie Retallick, the talismanic New Zealand second-rower who has never lost to the Springboks, said his team are certainly embracing the history of the occasion.

“You can’t underestimate them. We’ve talked about the fact that it’s the 100th Test between the two nations and they are the World Cup champions, it’s the first time the All Blacks have played a World Cup champion in a long time. So we’re going out there to give it our best shot and hopefully take it to them, Retallick said.

“Where they’ve caught us the last couple of times, when they did, was through their line-speed defensively. They’ve outmuscled us and we haven’t been able to break them down through our attack and then they’ve punished us. So physically, you’ve always got the set-piece battle but you also have to deal with their line-speed.”