The return of Ruan Combrinck: ‘It’s a privilege to play again’

The Bulls utility back opens up about playing for the Boks, the joy of club rugby, injuries and what the URC will bring. 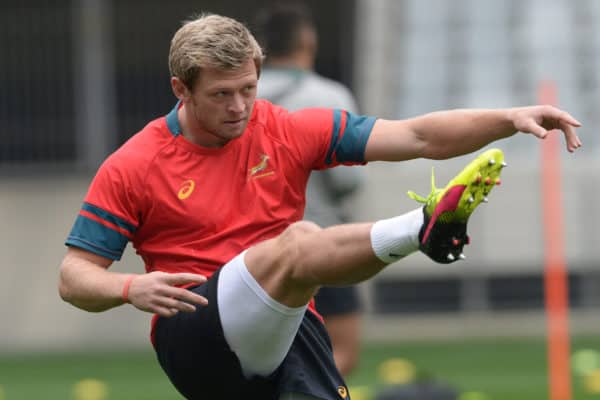 Ruan Combrinck, a former Springbok wing, is back in rugby after an extended break and hoping to make the most of a second chance, with the Bulls. Picture: Ashley Vlotman/Gallo Images

As much time as Ruan Combrinck has spent among his beloved Brahman bulls on his farm, the winger had itchy feet to join the Bulls rugby team on a good old-fashioned “stampede” up North for the first four rounds of their United Rugby Championship campaign.

And when he touched down in Dublin with the team this week, Combrinck was that much more eager to take the opportunity he’s been given by Jake White and make the most of it after being forced to sit on the sidelines for the past 16 months.

He knows all about the privilege of being able to do what he loves on a rugby field and feels this more intensely than ever after having that privilege taken away from him through a combination of injury and a focus on his successful Brahman breeding project.

ALSO READ: All Blacks 100th Test: Don’t bank on a Bok win – what the stats tell us

“It’s been a difficult journey back, but as long as you’ve still got that hunger then it makes it a lot easier,” Combrinck said.

“It’s great to be involved in rugby again. You know, when you’re a young boy that’s all you know. It’s just about rugby for you. And then you get a taste of what comes after rugby. You learn a lot when that bubble bursts and that good life is not in front of you every day anymore. You realise the things you miss, and you promise yourself you won’t ever take that for granted again.”

In fact, it was a humble club game in Pretoria’s Carlton Cup that brought this message home to Combrinck in a big way.

“I played club rugby before we left on tour and it was the greatest thing because you experience again that pure enjoyment of rugby,” he said.

“When you’ve been through operation after operation like I have, rugby can start to feel like a job and you lose a bit of that passion. But when I saw these other club players who just play the game for the pure love of it, it was a step back for me and it reminded me why I started playing the game.”

ALSO READ: Faf on yellow card against the Wallabies: ‘I’d do the same thing again’

And it’s also what’s making him so excited about this Bulls’ stampede up North as they look to begin a new era against new opposition.

“In a moment on the rugby field you can build a connection with somebody that can turn into a lifelong friendship. Your rugby career will end, and then all you have is those memories and those moments to cherish,” he said. “And the friendships. That is special. It’s easy to just say these things, but to truly understand them is another thing entirely. That club game made me realise this again.”

At the age of 31 and with a wealth of experience that includes playing in Europe and for the Springboks, Combrinck will add tremendous value to the team dynamic and especially among the younger members of the Bulls squad.

“When you’re young, that first time touring overseas for an extended period can be tough. Guys miss home or their girlfriends. When I was younger it was all about bringing your PlayStation with you on tour, but I think that’s changed,” he said.

‘What will be will be’

“It’s important to remember that you can only control what you can control and bring your best to the tour. You can’t think and plan too far ahead. My best friend and I always say, ‘What will be will be’. It’s especially true in today’s world with all the uncertainty out there. We all hope for things in life, but at the end of the day make peace with the fact that what will be will be.

“I’ve also seen that if a team is happy off the field, then that tour – that stampede – is a whole lot easier. It’s a long season and it can be difficult in a group environment to keep everybody happy. But if you’re at peace with yourself and what your job is, it makes it easier for the whole team.”

Combrinck says he’s also looking forward to the challenge the United Rugby Championship will bring as they match up against the powerhouses of European club rugby.

“I think that’s going to be lekker. At the end of the day it’s just great for our players to play there, and for them to come here. It can only improve your own game when you play against the best. For me as well, having been out of the game for a while, it’s going to be great to see what I’ve got to give.”

So, as a farmer who spends his days around cattle, what does Combrinck believe makes for a good stampede?

“For a start, I’d tell you to get a Brahman bull.”

A world-class selection of Bulls rugby players will also almost certainly do the trick as well.