"I’m sure he’s going to bring energy and enthusiasm that will lift the team," said Marcell Coetzee of Morne Steyn. 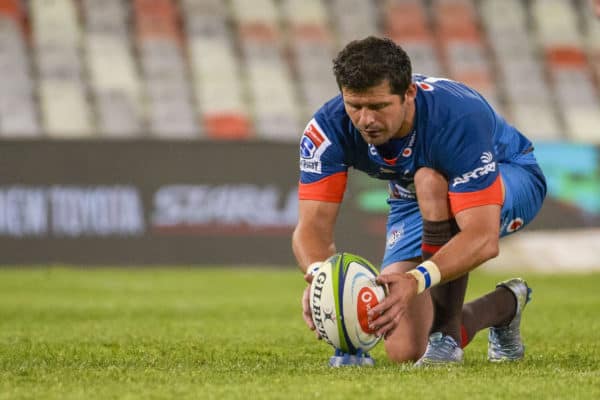 Morne Steyn is set to feature for the Bulls in their final URC tour game against Edinburgh this weekend, after replacing the injured Johan Goosen in the squad. Picture: Frikkie Kapp/Gallo Images

The Bulls have lost a leader in Johan Goosen, but captain Marcell Coetzee said on Tuesday that welcoming the player responsible for the Springboks winning the series against the British and Irish Lions back into the squad can only lift the team as they look to finish their first overseas campaign in the United Rugby Championship on a high against Edinburgh on Saturday.

Morne Steyn arrived in Edinburgh on Tuesday, via an overnight flight from Frankfurt, with the Bulls confirming that flyhalf Goosen was headed in the opposite direction, flying back to South Africa to have scans on the knee he injured in last weekend’s momentous win over the Cardiff Blues.

“Johan is a real character and a good leader in the team, and we are bleeding for him,” Coetzee said. “But now we have Morne here, who won the British and Irish Lions series, he has fantastic experience that you just can’t buy.

“It’s going to be awesome to have him with us this week, what a character he is and a legend of Bulls rugby. He is consistent in all he does and I’m sure he’s going to bring energy and enthusiasm that will lift the team.

“Chris Smith also showed his character and resilience when he replaced Johan, I thought he had an excellent game and he carried that flyhalf mantle really well,” the Springbok loose forward added.

Last weekend’s impressive comeback win against Cardiff was vital for the Bulls after they started the competition with chastening defeats against Leinster and Connacht. It’s their last week on a tough tour to a brand new environment, but Coetzee said the Currie Cup champions are hungry for another win this weekend.

“The mood is a bit more positive now after the win, but we want to be consistent. There’s definitely some new energy, we know it’s our last week on tour and there’s plenty to play for,” said Coetzee.

“We want that same mindset as in the second half against Cardiff when we gave it everything and the passion and character of the team came out.

“We just want a successful end for the tour, having come into a whole new tournament not knowing what to expect. We are still quite a young group, but we are growing by the day.

“Hopefully things are right now and we must make sure we don’t take a step backwards this weekend. Our performance on Saturday will say a lot about how we have grown as a group and how strong our culture is.”