Nienaber lauds ‘magical’ Steyn for his contribution to Boks

"He's been such a great servant to South African rugby and a brilliant rugby player." 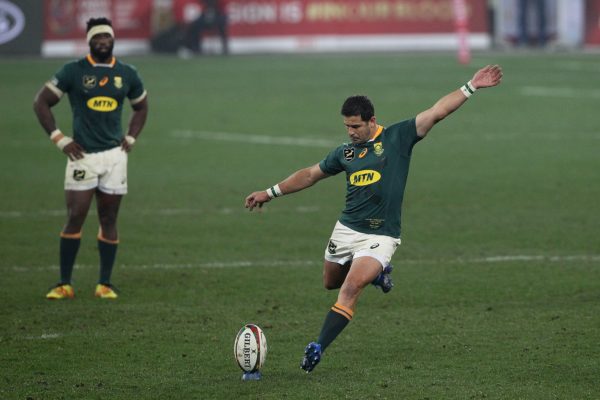 Morne Steyn kicks the winning penalty as Springbok captain Siya Kolisi looks on in the final match of their series against the British and Irish Lions earlier this year. Picture: Gallo Images

The 37-year-old Bulls great helped the Boks beat the British and Irish Lions for the second time in his career earlier this year and played an integral role in the larger squad during the Rugby Championship.

He ends his illustrious international career on a high having scored 742 points in 68 Tests, with a fairytale second Lions series win under his belt, after he had previously last played for the Springboks in 2016.

“He’s been such a great servant to South African rugby and a brilliant rugby player,” said Nienaber.

“So firstly hats off to him in terms of what he’s delivered on the rugby field. I mean, just the magic he created in beating the British and Irish Lions twice and the specific manner that he’s done it just speaks volumes for the guy.

“Off the rugby field he has been phenomenal. Working over the last 20 weeks, he always contributed, helped us prepare the team, was never scared to pass his wisdom to the younger players, so there is so much I could say about the guy.”

Had Steyn chosen to keep his international career going, he would have been in line to feature for the defending champs at the 2023 World Cup in France at the spry age of 39.

“We wouldn’t have selected him in the British and Irish Lions and Rugby Championship groups if we didn’t feel that there was a role for him to play up to 2023, but we are all in different stages of our lives and we respect his decision and we wish him well,” said Nienaber.

In the end, Steyn’s decision came down to the tough nature of professional rugby nowadays, with bio-secure bubbles and being away from family for extended periods of time playing a deciding role in him retirement.

“I think it’s time to call it a day now. I’ve had a lot of time to think about things and it has been difficult over the last few months, being away from home with touring and being away from my kids.

“I told Jacques I won’t be available for the end of year tour. It has been difficult for me being away from my family for the past 17 or 18 weeks and I want to spend more time with them.”