Bok fans come to the party, with Wales series expected to be sold out

There has been an emphatic response from SA's starved rugby fans. 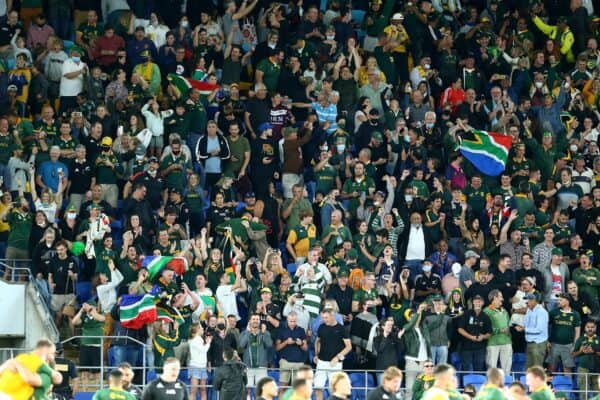 A sold out series between South Africa and Wales is firmly on the cards after it was confirmed this week that the stands would be packed for the first Test at Loftus Versfeld on Saturday.

After the Covid restrictions on stadium capacity were lifted last week, Pretoria, Bloemfontein and Cape Town immediately had another half-a-stadium to fill, with Loftus given just over a week to do so.

It proved to be no problem however, and with tickets for the Bloemfontein Test selling fast, and with Cape Town having had a ticket ballot due to exceptional demand, it is all set to be a sold out three-Test series.

It is an emphatic response from South Africa’s starved rugby fans, who have been turning out in their droves as restrictions have been slowly lifted.

The United Rugby Championship final between the Stormers and Bulls, held just under two weeks ago, was a sold out affair with restrictions still in place, as 31 000 fans turned out for that game.

The Currie Cup final over the past weekend was then lucky enough to be held days after restrictions were lifted, with fans responding positively to sell out the 13 000 capacity Griqua Stadium for the finale.

Following the Welsh series, the Springboks will then have three more home internationals this year, with two massive Tests against the All Blacks in Mbombela and Johannesburg at the start of August and the final Test of the Rugby Championship against Argentina in September.

The Ellis Park Test is already over 70% sold out and is expected to be fully sold out within the next week or two.

The Test at Mbombela Stadium is the first ever featuring the All Blacks in the city and should thus have no problem selling out, while they are also riding the wave of the Pumas’ recent Currie Cup success.

The final Test at Kings Park should also be sold out, as it could very well be a Rugby Championship decider.

All of this is a massive boost to the coffers of SA Rugby, who have struggled during the Covid pandemic, and proves that there is plenty of interest in top class rugby action in the country.