WATCH: Jantjies still in Bok plans but ‘doesn’t fit into the six-two split’

Damian Willemse has been backed as starting fullback for two of the games in the Welsh series and played off the bench in the second Test. 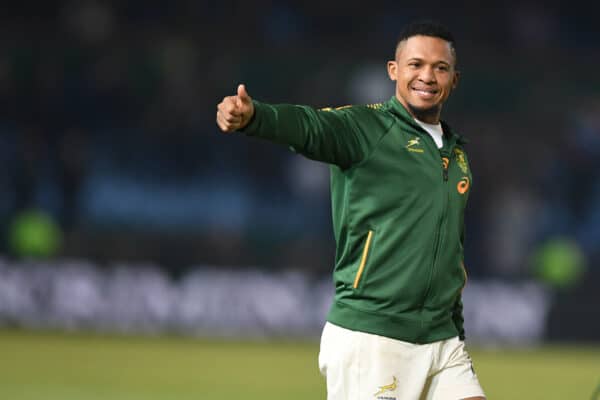 Springbok flyhalf Elton Jantjies is still firmly in the team's plans despite him not seeing any game time since a disastrous 40 minutes in the first Test against Wales. Picture: Lefty Shivambu/Gallo Images

Springbok flyhalf Elton Jantjies is apparently still a part of the national team’s plans, but currently doesn’t fit into their system, due to them backing a six-two split of forwards to backs on the bench.

Jantjies has been a hot topic since he started the opening match against Wales, putting in a disastrous 40 minute performance before being yanked off, and has not been included in the squad since.

Bok coach Jacques Nienaber explained away his poor showing in the first Test, making the valid point that Jantjies had only played about 30 minutes of rugby in the season, before he was injured and by the time he was ready to return to his Japanese club the side hadn’t made the playoffs.

ALSO READ: Boks to do it for Eben and Bongi

“He (Elton) probably misses out because we are going with six-two splits. If we go five-three Elton would be in the mix. That’s unfortunately where we are and that’s why I thought it was so important to give him some game time (in the first Test),” explained Nienaber.

“With Handre only arriving on that Sunday (before the first Test) and with Elton having been working with us (in the build-up) it was the ideal opportunity for us to use him and he got a good 40 minutes.

“The conservative way would have been to go with the five-three split, but if we had done that we wouldn’t have seen Gazza (Damian Willemse) at 10. So we decided to stick with the six-two split and that’s unfortunately where we are.”

Despite this explanation, Jantjies enjoyed arguably his best season of international rugby for the Boks last year, playing mostly off the bench in that same six-two split, but has clearly fallen out of favour.

Willemse has been backed as starting fullback for two of the games in the Welsh series and played off the bench in the second, signalling that he is a massive part of the team’s plans going forward.

Nienaber has also admitted that Willemse is their preferred successor to Frans Steyn, thanks to him being able to cover several positions in the backline, including flyhalf which he took over from Jantjies in the first Test.

It will be interesting to see if Willemse will continue to be backed as a starter in the coming Rugby Championship, or if Willie le Roux will slot back into fullback, but it seems as if the Bok management have backed them as the two utility players to star and play off the bench for the foreseeable future.

This leaves Jantjies in a tricky position as with him unable to gain any extra game time over the Welsh series, and with the Rugby Championship kicking off at the start of August, any injuries in the flyhalf department could leave the Boks in a precarious position.

When quizzed on them having to possibly bank on an undercooked Jantjies in the Rugby Championship should any injuries occur, Nienaber admitted: “I guess that’s the way it is.”