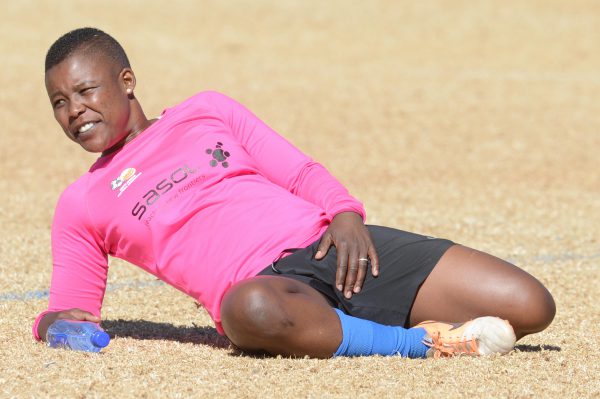 “I ask myself if the ladies in our country are passionate about football, would they still be playing if Sasol wasn’t investing in the sport?” Modise said.

Modise is one of the most talented strikers to come out of South Africa, having scored 100 goals for the national team in her career, making her the top goalscorer in national team colours across Bafana Bafana and Banyana Banyana.

South Africa has not formed a professional women’s league, with Mamelodi Sundowns and Bloemfontein Celtic the only Absa Premiership teams with a ladies team.

While there is the Sasol Women’s League, it has not adequately addressed the issue of women earning a living from football in South Africa.

Modise believes male players can help nurture women’s football in the country by helping to bring the attention it needs for it to grow.

“Each club should be forced to have a ladies team. And women should play their matches ahead of the league games as curtain- raisers unlike having musicians at the stadium to entertain the fans ahead of the game.”

The 34-year-old hasn’t studied towards a coaching certificate after retiring because of the stress she endured as a footballer, which ultimately weakened her passion and commitment for the beautiful game.

“To be honest I haven’t done anything in the way of getting an education to become a coach. I have been burned a few times getting involved in football and spats with some officials. I could be a good coach and given a chance to study I would do it, I know I can be a good coach, but at this time I am not being informed of coaching courses when they are made available,” said Modise.

Modise is involved with a local football club in Soweto and collaborates with the government to give motivational talks during HIV/Aids campaigns and making appearances at corporate functions as a speaker.

“I enjoy the work I do now, I might not be involved in football the way I would like to but I am doing something.”