All Stars axe Kannemeyer as NFD hots up

A home draw against Black Leopards saw Cape Town All Stars sack their coach David Kannemeyer’s whose position Phakaaathi understands has been taken by Vladislav Heric who once helped Chippa United win promotion. 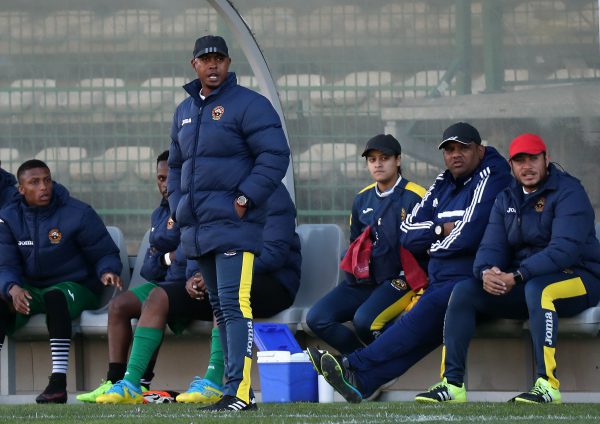 Overall, a total of 19 goals were scored in the National First Division at the weekend which is six more than were scored in the top flight. Shaun Bartlett’s University of Pretoria were the biggest contributors to the goals thrashing a hapless Mbombela United 4-1.

The KZN derby also lived up to expectations with five goals scored as Royal Eagles registered their first win under Zipho Dlangalala.

Tshakhuma 2 (L. Hlongwane x2) Witbank Spurs 2 (R. Moses; M. Slovo)
Siyavutha squandered a 2-0 lead to end up sharing the spoils at Thohoyandou Stadium on Saturday afternoon. Raphepele Moses and Mrawu Slovo had scored in the first half for the visitors but Tshakuma Tsha Madzivhandila equalised in the second half through Lifa Hlongwane’s brace.

Jomo Cosmos 1 (T. Lingwati) Uthongathi FC 1 (X. Slawula)
Ezenkosi’s good home record came to a halt as the Cane Cutters stole a point in their own backyard at Vosloorus Stadium on Sunday afternoon. Xolani Slawula opened the scoring 11 minutes into the match but Thato Lingwati equalised some twenty minutes later. The point saw Uthongathi jump to third from bottom.

Mthatha Bucks 0 Stellenbosch 1 (A. Mosiathlaga)
A first half goal by Abednigo Mosiathlaga was enough to sink Amathol’amnyama who have been doing quite well. The win ensured Stellies keep their position at the top while Bucks remain in third place after six matches.

AmaTuks 4 (G. Moseki x3, B. Konki) Mbombela United 1 (S. Zwane)
For a team who were rumoured to be on the verge of giving their coach Shaun Bartlett the boot, University of Pretoria have become the team to beat in the NFD. Bartlett’s team thrashed Tingwenyama with Gabriel Moseki scoring a first half hatrick while Brendon Konki also scored one to go into the break 4-0 up. Siphelele Zwane got the consolation goal for the visitors in the dying minutes. AmaTuks are still second, one point behind leaders Stellenbosch FC.

Richards Bay 2 (T. Nkoana, S. Mkhulise); Royal Eagles 3 (K. Hlongwane, B. Komane, D. Brown)
Played in true derby fashion, the match at Umhlathuze Sports Complex didn’t disappoint as team came out to play for a win. Eagles who are now under former Orlando Pirates assistant coach Zipho Dlangalala’s guidance took a 3-0 lead into half time but almost gave it away in the second half. Kwanele Hlongwane, Boikanyo Komane and Diego Brown all scored in the first half but Thabiso Nkoana and Siphelele Mkhulisi’s efforts were not enough to save the day for ailing Rich Boys.

Super Eagles 1 (T. Setsumi) Real Kings 0
Phukulla Ntsu continued their impressive run and moved up to the top eight with a win over the Magic Boys at Goble Park on Saturday afternoon. Thabo Setsumi scored the match’s only goal in the second half.

CT All Stars 0 Black Leopards 0
Lidoda Duvha scored a valuable point away to Igugu leKapa who consequentially fired their coach David Kannemeyer and replaced him with Vladislav Heric as a result. The point however did little to help Leopards’ cause as they are still in the relegation zone, just two points above bottom placed Ubuntu CT.

Highlands Park 1 (P. Shalulile, 48’) Ubuntu CT 0
Owen Da Gama had a brilliant start to his career as Lions of the North coach with a slender win over Ubuntu who have proved to be good travellers. This was Da Gama’s second win in two games. Peter Shalulile scored from a rebound in the 48th minute after Mothobi Mvala’s initial penalty kick was saved by the keeper.