Orlando Pirates continued their impressive run of form as they beat bottom-of-the-log side Platinum Stars 2-0 in an Absa Premiership match, at the Royal Bafokeng Sports Palace on Saturday afternoon. 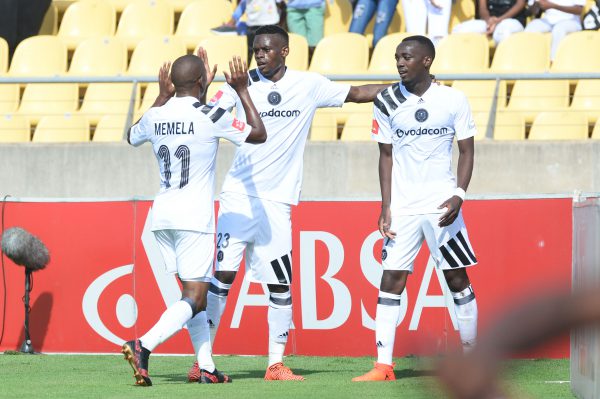 Pirates, sporting impressive statistics of three wins, four draws and just the one loss in their last eight league games, deservedly took the lead in the 28th minute.

After some quality build up work on the left side of the park, Zambian striker Justin Shonga headed home the cross to give the visiting team’s fans something to cheer about.

The visitors made sure of the three valuable league points in the 72nd minute when midfielder Thembinkosi Lorch received the ball from the right and slotted the ball confidently past Stars’ goalkeeper Dino Visser.

The pressure is definitely on Stars and it could be seen in the performances of the players. Since the departure of their seasoned goal-getter Ndumiso Mabena to Bloemfontein Celtic, too much has been left on the firm shoulders of Bongi Ntuli, who try as hard as he does, often finding himself well marked and outnumbered.

A total of 30 points from 30 league games is the usual target for teams that are looking to avoid the dreaded drop from the top flight to the National First Division, and this will be foremost in the mind of coach Roger de Sa, with the sale of the club franchise still firmly on the cards.

The Buccaneers, as Pirates are known, will travel to the Mother City to play Ajax on Wednesday, while Stars’ next fixture is an away trip to the Eastern Cape to face Chippa United next Sunday