Banyana Banyana were handed a cheque of R500 000 for winning the Cosafa women’s challenge cup last year, the same amount of money given to senior men’s team who win the men’s version of the tournament. 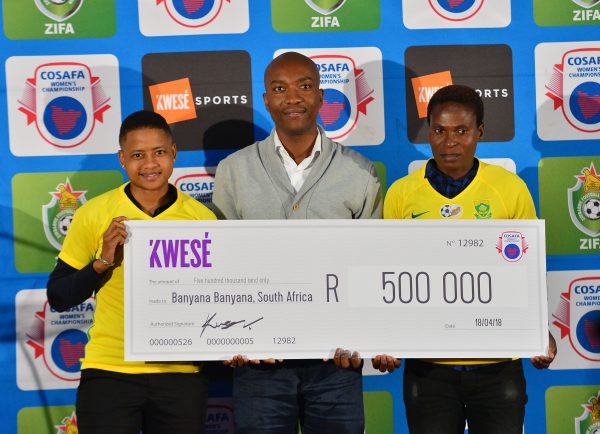 Cosafa, along with new sponsors Kwese Sports handed the cheque to Banyana assistant captain Fefiloe Jane and defender Noko Matlou at the Safa House on Wednesday.

Jane says the prize money is a huge motivation for every woman playing football in the country, adding that the fact that it is the same amount of money given to men’s team that won the competition makes them feel very special.

“it is very encouraging and motivating for us to get the same prize money as the men’s teams, especially for every young girl who dreams of playing for the senior national women’s team in the future,” said Jane.

Zimbabwe, who finished on second place at the competition received R250 000, while Zambia got R150 000 for finishing on third place and Kenya, who were the guest nation at the tournament pocketed R100000 after finishing on fourth place.