Premier Soccer league sponsors Nedbank have condemned the violent scenes that occurred during the Kaizer Chiefs and Free State Stars match at the Moses Mabhida Stadium this past weekend. 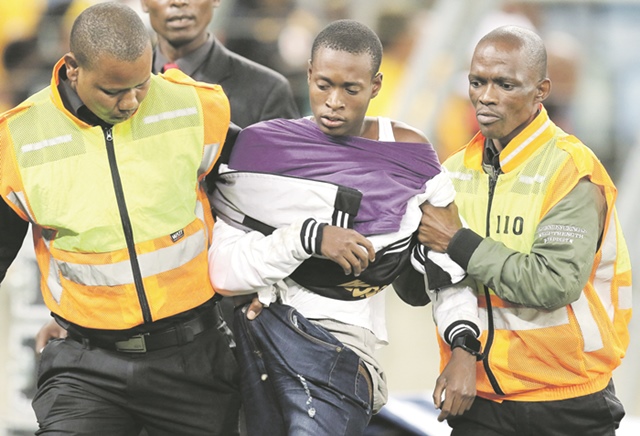 General views of crowd violence in the first half during the Nedbank Cup Semi Final match between Kaizer Chiefs and Free State Stars at Moses Mabhida Stadium on April 21, 2018 in Durban, South Africa. (Photo by Anesh Debiky/Gallo Images)

Scenes of fans invading the pitch and damaging the stadium after Chiefs lost 2-0 to Stars have left many people in the football in shock.

“Like many South Africans, we at Nedbank are deeply disturbed by the unruly behaviour of certain groups of spectators that attacked security guards and destroyed broadcasting equipment at the semi-final match on Saturday 21 April between Kaizer Chiefs and Free State Stars at the Moses Mabhida Stadium in Durban,” read a statement from Nedbank.

“We are encouraged by the swift response of the South African Police Service who have already confirmed the arrests of two people in connection with these unlawful acts,” the statement continued.

“As proud sponsors of the Nedbank Cup since 2008, we’ve used the platform to position Nedbank as the bank for all South Africans and to use our financial expertise to do good for individuals, families, businesses and society. As a result, the Nedbank brand cannot be associated with the acts of violence that was on display for all to see at a Nedbank Cup game, we are confident though that the Premier Soccer League working with safety and security stakeholders will take the necessary steps to eradicate any form of hooliganism from the beautiful game of football.

“We don’t tolerate any acts of violence against any member of society and we all have to remind ourselves of our responsibility to uphold the values of our country, and the examples that we set for our youth. We would like to wish all of those affected by the incident a speedy recovery and we are thankful that there are no fatal casualties as a result of the senseless acts.

“Furthermore, the sponsors revealed that they will be working with the PSL during the investigation and went on to congratulate Stars and Maritzburg United, who beat Mamelodi Sundowns in the other semifinal to reach the final of the competition.”