Micho wants Pirates to do better

Sredojevic was disappointed with the way his side conceded a goal against Highlands Park and said the players have learnt a valuable lesson. 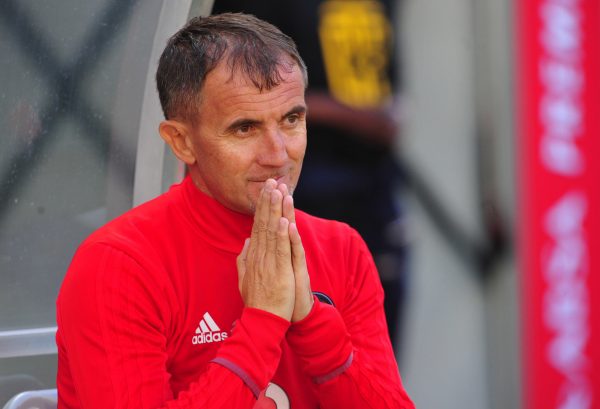 Orlando Pirates coach Micho Sredojevic says they didn’t achieve their target and his charges need to do much better in their next game after their 1-1 draw with Highlands Park at the Orlando Stadium on Saturday night.

The Buccaneers came back from a goal down after goalkeeper Wayne Sandilands’ schoolboy error in the first 15 minutes saw the visitors take the lead after he made a hash of clearing a back-pass from Bucs defender Gladwin Shitolo.

Pirates striker Justine Shonga levelled the scores for the home side in the second half with a penalty, but some fine saves from Highlands keeper Tapuwa Kapini ensured the team shared the spoils on the night with Bucs looking dangerous whenever they were on the attack.

READ: Bucs claw back to earn a point against Lions of the North

“This is the first game of the season but there is a marathon of 30 matches. I am fully aware that today (Saturday) we didn’t achieve our target.”

Sredojevic was disappointed with the way his side conceded a goal and said the players have learnt a valuable lesson.

“It is very hard to accept because he (Sandilands) has worked very hard for six weeks, then one situation comes like this and he concedes a goal. You have two choices – one is to attack him and put him into a deeper hole – or ask the team to support him in order not to waste the substitution. It’s really unfortunate, but we have learned the lesson.”

Highlands coach Owen da Gama meanwhile, admitted his side were lucky to have taken a point the match, but was delighted his newly promoted side managed to avoid defeat in their first league game of the season.

“I think credit must go to Orlando Pirates for the type of football they played. But I am just happy we managed to get a point in our first game in the PSL,” said Da Gama.

Pirates next face Chippa United at the Nelson Mandela Bay Stadium on Wednesday, while Highlands will host Black Leopards at the Makhulong Stadium on Thursday.