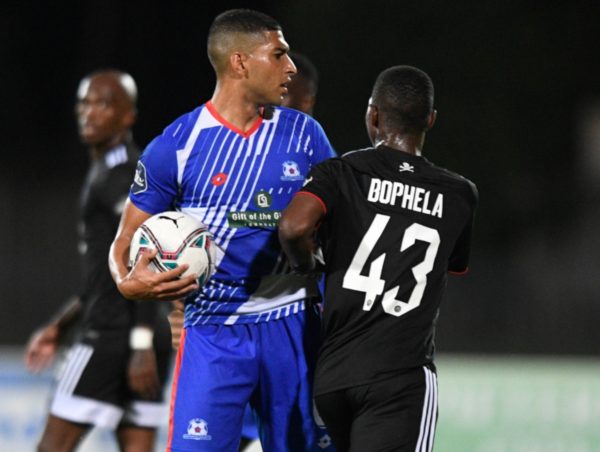 A number of injuries at Orlando Pirates have given a 21-year old winger Simiso Bophela an opportunity to make his debut for the Buccaneers, pleasing co-coach Fadlu Davids with his display in their DStv Premiership tie against Maritzburg United.

Even though the Buccaneers didn’t win the match as the teams played to a goalless draw at the Harry Gwala Stadium on Wednesday, Bophela did make the best out of the opportunity.

The Buccaneers academy graduate was introduced on the 68th minute, replacing Bandile Shandu as Bucs pushed more players to attack in search of a goal.

“We cannot complain about players who are not available. I really have to put trust in the players who are available and build them up, build their confidence, give them game time and allow them to display their skills. It was a really good debut for the youngster. I am happy for him, in a difficult game where he was facing two players where he’s normally skilled at going in a one-against-one and being able to unlock the defence,” said the Pirates coach.

Davids added that given the Soweto giants’ busy schedule, juggling between the league and Caf Confederation Cup fixtures, the technical team will makie a number of changes in how they line-up.

“These opportunities come, of course, with Caf and PSL matches where some players are not available or are not registered for Caf, so you have to change, keep the players fresh and find the best player to be able to do the job on the day.”

With the likes of Thembinkosi Lorch, Tshegofatso Mabasa and Vincent Pule still out nursing injuries, the young Bophela will use this opportunity to try and break into the starting line-up.