Dube ecstatic with Chiefs contribution, but hungry to improve

'I am not yet at the level I want to be at' says the lanky Amakhosi defender. 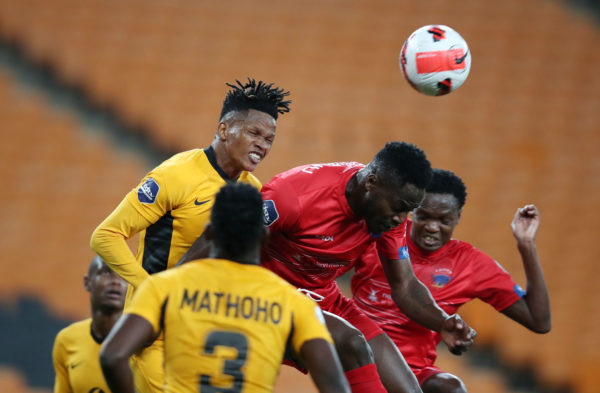 Austin Dube has taken to life at Kaizer Chiefs like fish to water. Picture: Muzi Ntombela/BackpagePix

Austin “John Wick” Dube was an obvious surprise signing by Kaizer Chiefs whom he joined from GladAfrica Championship side Richards Bay FC in June. But he has proved to be a solid finding for Amakhosi and is fast developing a good central pairing with Mulomowandau Mathoho at the back.

While it took him a while to be drafted into the team, with coach Stuart Baxter trying to ease him in instead of just throwing him into the deep end, he has done fairly well.

“I think everything is going well and judging by the past two games we have done well. We have been doing well even at training. I think we are ready for the game against SuperSport United,” quipped Dube when asked about how he has settled.

“I am not yet at the level I want. I feel I need a few more games to get to the level I want to be in – where I used to be. I think I have done well so far but I obviously want to improve.”

Chiefs have a tricky trip to the north of Gauteng where they face SuperSport United at the weekend and Dube believes that if they stick to their game plan, they have a big chance of adding to their big win over Chippa United last weekend.

“If we stick to our plan, our tactics I think we will do well there. We just have to be us and play our normal football.

“I have watched almost all their games this season. They have been doing well but anything is possible.

“Taking it from the previous game, we did very well but I think we can still improve and do much better going into the weekend’s game. We are going for another win, and looking to perform even better than in the last game.”

Baxter unhappy, says Chiefs were losing the game before Cole’s red card
4 days ago
4 days ago

Baxter unhappy, says Chiefs were losing the game before Cole’s red card
4 days ago
4 days ago