Parker at the double to see Chiefs past SuperSport

Stuart Baxter's Amakhosi pick up a second DStv Premiership win in a row. 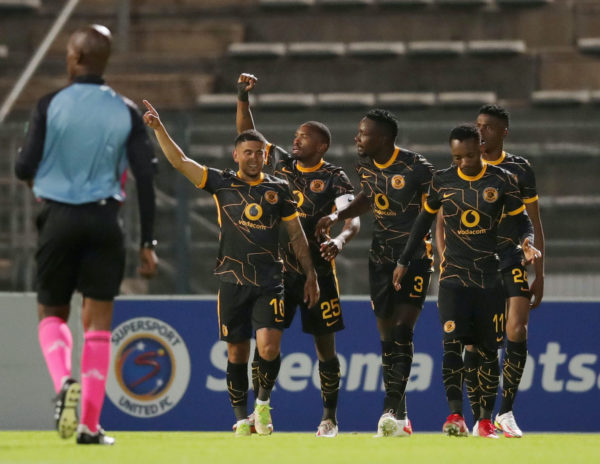 Bernard Parker celebrates with his teammates after scoring against SuperSport. Picture: Samuel Shivambu/BackpagePix.

Kaizer Chiefs had to dig deep to get their second win on the trot as they beat SuperSport United in a DStv Premiership match at Lucas Moripe Stadium on Sunday evening.

Amakhosi came into the match with some confidence having scored their biggest win of the season so far when they beat Chippa United 4-0 last weekend.

And while they could not score as many goals this time around, they will be happy with the 2-1 win against one of the form teams.

Chiefs first real chance came in the 19th minute when Keagan Dolly found Bernard Parker with the long ball. The veteran striker tried a first time shot but Ronwen Williams managed to get to it and tip it wide.

Two minutes later SuperSport had a chance of their own, with Thamsanqa Gabuza crossing the ball to Sipho Mbule, but his shot was deflected wide as he tried to catch out Daniel Akpeyi with a snap shot.

Parker finally got on the scoresheet on the stroke of half time, this time beating Williams with a low shot from another Dolly pass. But it is worth mentioning that Williams could have done better to deal with the shot that he let slip underneath him.

The Amakhosi celebrations were, however, short lived as Njabulo Ngcobo’s attempted clearance from a Mbule free kick on the right sailed past Akpeyi into goal for the equaliser just before half time.

Four minutes into the second half, Chiefs took the lead again with Dolly again setting Parker through on goal to complete his brace on the night.

With just over 20 minutes to the end, Chiefs had to restructure their team with Parker taken off with a hamstring injury. Kearyn Baccus came on in his place, taking a midfield role and pushing Dolly higher up.

Amatsatsantsa came close to getting an equaliser in the 75th minute, with Luke Fleurs allowed a header unmarked inside the Amakhosi box from a Mbule free kick. But Fleurs sent his effort just over the bar and Akpeyi looked to have had it covered anyway.

SuperSport tried their bett to find a way back but found Chiefs to have formed a good defensive block at the back and they could not find a way through to Akpeyi’s goal.

The defeat leaves SuperSport in second place and still four points behind Mamelodi Sundowns, having played a game more than their neighbours. Sundowns were on Caf Champions League duty this weekend, where they advanced to the group stages.

Chiefs jumped up to fifth position with 12 points after eight games and with their second win in a row will feel they are getting some momentum and look to climb further. Amakhosi’s next game is on November 2 against Stellenbosch FC at FNB Stadium