Keagan Dolly is the hero for Amakhosi with his first Soweto derby goals. 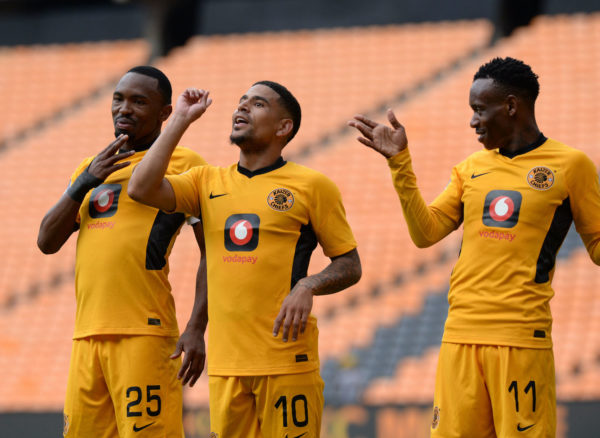 Keagan Dolly struck twice in the second half for Kaizer Chiefs, including a stoppage-time penalty, as they beat Orlando Pirates 2-1 on Saturday in a DStv Premiership Soweto Derby at FNB Stadium.

Pirates’ Linda Mntambo looked like he had earned Pirates a point, capitalising on an error from Chiefs goalkeeper Daniel Akpeyi to fire in just four minutes from time.

Pirates defender Olisa Ndah, however, was adjudged by referee Victor Hlungwani to have hauled down Khama Billiat inside the area in stoppage time, and Dolly made no mistake, adding a penalty to his strike three minutes into the second half that had given Chiefs the lead.

Stuart Baxter’s side had a chance inside the first minute as a glorious long ball found Dolly on the right, and he set up Khama Billiat, but the Zimbabwean’s shot was blocked for a corner.

Pirates were clearly targetting the right side of Chiefs’ defence, where Njabulo Blom is a bit of a makeshift wing-back, and the Buccaneers’ Namibian winger Deon Hotto certainly found some joy in that position.

In the 6th minute, Hlatshwayo found Hotto with a raking pass, and he did well to get to the byline, but his cross was cleared by Erick Mathoho.

Chiefs had the first shot on target in the 9th minute, Phathushedzo Nange firing at Daniel Akpeyi, but the Nigerian ‘keeper made an easy save.

Pirates had given new Ghanaian striker Kwame Peprah a first league start, with injuries ravaging their frontline, and he looked bright at times. In the 13th minute, Peprah rose to meet a cross from Linda Mntambo, but the ball glanced off his forehead and didn’t hit the target.

Mntambo then had a shot blocked on the edge of the area and Chiefs broke at pace, with Dolly finding Billiat, who sped past Fortune Makaringe and was blocked off, the Pirates midfielder getting a yellow card. Billiat stepped up to take the free kick but put it over the bar.

The closest Pirates came to scoring in the first half came from Makaringe as sliced cross struck the Chiefs crossbar in the 16th minute.

Chiefs should really have had a penalty in the 30th minute as Njabulo Ngcobo’s shot struck Hlatshwayo’s outstretched arm, but the referee Victor Hlungwani waved away their appeals.

Makaringe, meanwhile, came close again on the stroke of half time as he headed an Ntsako Makhubela cross just the wrong side of Akpeyi’s post.

Three minutes after the break, it was Chiefs who went in front. Hlatshwayo’s back pass was woefully weak and sent Billiat away. The Zimbabwean found Dolly in wide open spaces and he cooly beat Siyabonga Mpontshane.

Shortly after that, Bernard Parker headed over Nange’s cross as Chiefs looked to press home their advantage.

Pirates brought on Kabelo Dlamini for Makhubela on the hour mark as they looked for an equaliser, while attackers Tshegofatso Mabasa and Terrence Dzvukamanja came on in the 70th minute as part of a triple change.

Chiefs, indeed, had a chance to double their lead as Billiat broke clear, and attempted to chip Mpontshane, but the Pirates ‘keeper got a touch and Hlatshwayo hacked the ball away.

And Amakhosi looked to have paid the price for that four minutes from time as Dzvukamanja’s header was spilled by Akpeyi and Mntambo pounced to fire in from close range.

In stoppage time, however, Ndah inexplicably hauled down Billiat inside the penalty area, and Dolly drilled his spot kick into the corner of the net.