Is Kaizer Chiefs’ CBD still strong or is it crumbling at the seams?

Dolly, Billat and Castro are older, but are they wiser? 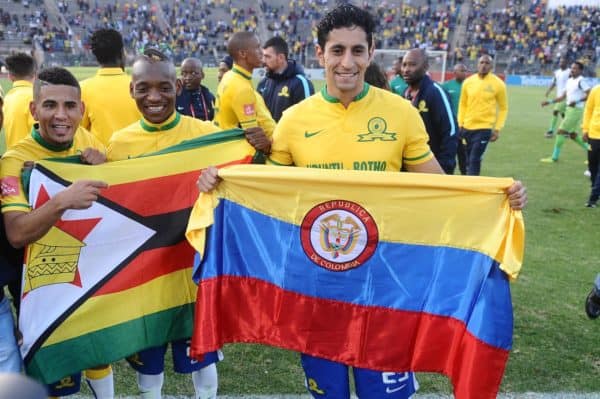 Keagan Dolly, Khama Billiat and Leonardo Castro celebrates together at Mamelodi Sundowns in 2016. Will they do the same at Kaizer Chiefs? Picture: Lefty Shivambu/Gallo Images.

Kaizer Chiefs completed a ‘CBD’ of their own on Tuesday when they announced the signing of Keagan Dolly.

Dolly, Khama Billiat and Leonardo Castro are now all on Amakhosi’s books, with Billiat also handed a new two-year deal on Tuesday, meaning the trio that caused such havoc at Mamelodi Sundowns, as they won the Caf Champions League in 2016, as well as the 2015/16 DStv Premiership title, and the 2015 Telkom Knockout, where they took down Chiefs 3-1 in the final.

Billiat and Castro both hit double figures for goals in that season, while Dolly scored nine goals in all competitions, while also racking up the same amount of assists.

The nickname was a huge compliment to a trio of players who helped Pitso Mosimane’s side achieve history, when they won a first ever Caf Champions League final, taking down Zamalek in the final.

Fast forward some five years, and the trio are back together at Naturena, but the question does have to be asked of whether they can supply anywhere near the same attacking force that they did at Masandawana.

Starting with the ‘C’ in the CBD, Leonardo Castro, now 32, hasn’t hit the heights of that 2015/16 campaign again, scoring precisely zero league goals for Sundowns in the subsequent 2016/17 season.

Castro’s move to Chiefs in 2017 got off to a slow start, but he has improved in the last couple of seasons. Castro netted eight league goals in all competitions as Chiefs just missed out on the title in the 2019/20 season, and followed that up with nine goals in all competitions with Chiefs last season. The Colombian marksman also managed to play a part in all-but four of Chiefs’ league games in the 2020/21 campaign, indicating that he may still have a little left in the tank.

As for the ‘B’ in the trio, Khama Billiat, it is safe to say he has never players as well for Chiefs, since he joined in 2018, as he did for Sundowns, where he also hit double figures for goals in all competitions in the 2017/18 campaign.

The Zimbabwean’s best season at Chiefs was his first, though he still only managed five league goals, and even if his past couple of campaigns have been hampered by injury, one has to wonder if the 30 year old’s best days are now behind him.

As for Mr D, or Keagan Dolly, he was rewarded for his heroics in the colours of Sundowns with a move to Ligue 1 side Montpellier in France in January 2017, but a combination of injury problems and fierce competition for first team places meant Dolly never really made as a fixture in the first team. Dolly left Montpellier with just one first team goal to his name in four and a half seasons at the club.

At 28, however, he is the youngest member of the CBD and should still have plenty to offer at Chiefs, and could thrive back in a South African environment, as long as he can stay fit for an extended period of time.

Indeed, could it be that a reunion will inspire this whole Chiefs trio to bring back the glory days? The jury is certainly out, however, and for now it is impossible to say if this CBD will be a roaring success or if it will look like an ageing metropolis.