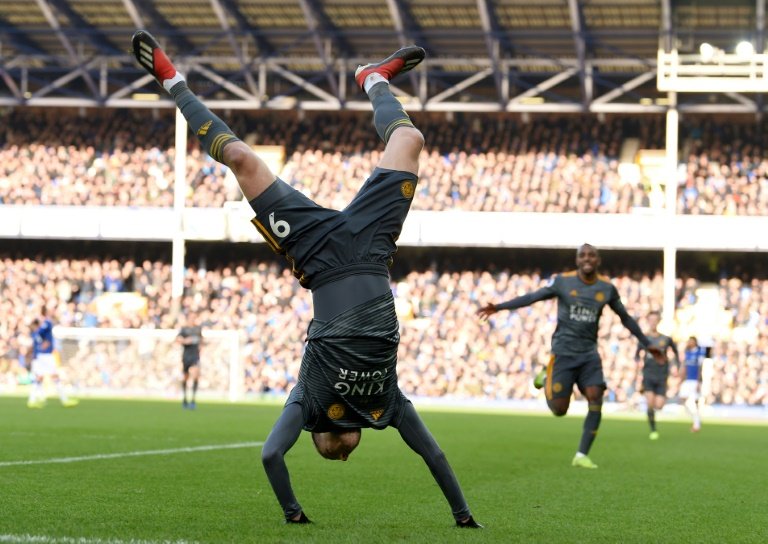 Jamie Vardy rescued an instantly forgettable match with his acrobatic celebration after scoring the only goal in Leicester's win over Everton. AFP/Paul ELLIS

It was the third time in seven days that the north London side, once renowned for an impregnable defence, had conceded three goals following 3-2 and 3-1 Premier League league defeats by Crystal Palace and Wolves respectively.

Leicester’s Youri Tielemans opened the scoring at the King Power Stadium in the second half and Vardy netted twice for the Foxes after the visitors had defender Ainsley Maitland-Niles dismissed for two bookable offences before half-time.

The winning goals, however, owed little to that dismissal.

Arsenal failed to stop James Maddison’s cross or mark Tielemans as he stole in to head home the first, then were embarrassingly outwitted by a goal-kick from which Vardy poached the second with the help of a rebound off the crossbar.

It left Unai Emery’s men facing an uphill battle to force their way back into the top four, although victory in the Europa League could also secure a Champions League place.

Three defeats in a row, however, have left Emery with a clear picture of the failings that linger from Arsene Wenger’s reign.

Maddison had a curling shot from the edge of the Arsenal penalty area deflected wide early on before Tielemans volleyed off target from a similar position.

Arsenal had shown little attacking threat but, when Maddison squandered possession on 22 minutes, the Gunners built a quick counter-attack from which they could have opened the scoring.

Pierre-Emerick Aubameyang’s smart turn and pass fed Alex Iwobi and his cross from the left found Alexandre Lacazette, who volleyed wide under pressure from Harry Maguire.

At the other end, Arsenal goalkeeper Bernd Leno made a superb save to push Wifred Ndidi’s header from a corner over the crossbar.

Then, 13 minutes from the interval, Arsenal were nearly undone by Marx Albrighton’s straightforward ball over the backline.

Vardy beat Sokratis to collect it but lofted a shot over the bar.

Suddenly, though, Leicester were hit by a rapid counter-attack from the visitors, ending with a neat pass from Aubameyang to Iwobi and a good, low save from Kasper Schmeichel to keep out his shot.

The encouragement was short-lived for the Gunners, however, as nine minutes from the break Maitland-Niles, who had already been booked for a barge on Ben Chilwell, went in late on Maddison and collected a second yellow card, followed by the inevitable red.

Arsenal avoided further damage in the final moments of the first half as Tielemans fed Vardy but his shot was well saved at the near post by Leno.

Despite Arsenal’s introduction of an extra defender and Leicester’s of an extra forward at the interval, the opening moments of the second half brought an evenly-matched contest.

That was until the 59th minute when poor defending allowed Leicester to take the lead.

Albrighton and Maddison were given time to exchange passes before Maddison delivered a cross which Tielemans strolled in between Sokratis and Laurent Koscielny to head home with little resistance.

Emery was warned by referee Michael Oliver after his temper threatened to boil over as Arsenal were angered by some hefty Leicester challenges, notably whem Lucas Torreira was caught by Jonny Evans’s arm as the pair contested a corner.

But the game was up with four minutes remaining as Arsenal’s fallible defence failed to meet a long goal-kick by Schmeichel and Vardy lobbed against the crossbar before heading in the rebound.

The final goal, with the last kick of the game, was even more embarrassing for the Gunners as they allowed Ricardo to stroll past and square for a Vardy tap-in.

For more news your way, download The Citizen’s app foriOS and Android.