Lewandowski backed for Ballon d’Or ahead of Leverkusen clash 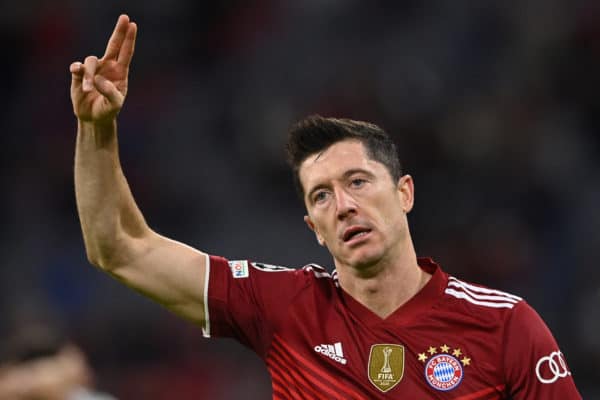 Robert Lewandowski is in the shortlist for Fifa's best award. (Photo by CHRISTOF STACHE / AFP)

“Robert deserves to win it, because in my view he has been more unbelievably consistent than any other player,” said Nagelsmann of his star striker in an interview with Munich paper Abendzeitung.

Lewandowski, who has been nominated for the prestigious annual award alongside the likes of Harry Kane, Leonardo Bonucci and Lionel Messi, is hoping to win his first Ballon d’Or next month after winning FIFA’s rival award for men’s player of the year in 2020.

The 33-year-old is in a barren spell by his own high standards as Bayern look to defend top spot against Leverkusen, having failed to score in back-to-back Bundesliga games for the first time since 2019.

Bayern are also looking to bounce back to their best form after a shock defeat to Eintracht Frankfurt before the international break allowed Leverkusen to draw level on points with them in second place.

Lewandowski has form in this fixture, however, having scored a late injury-time winner in Leverkusen last December to knock the then league leaders off top spot.

With seven goals already this season, the Polish star is currently joint leader in the Bundesliga scoring charts alongside Borussia Dortmund prodigy Erling Haaland, and just ahead of Leverkusen’s Patrik Schick.

Nagelsmann backed his veteran goalscorer to stay top dog in the German top flight for years to come.

“He is so dynamic, he doesn’t get injured and he can train a lot. I back him to continue playing at the top level for a few more years yet,” the Bayern coach told Abendzeitung.

His comments came as Bayern president Herbert Hainer played down rumours that the champions are mulling a bid for Dortmund star Haaland.

The Norwegian striker, who has also been nominated for the Ballon d’Or, is hoping to return to action against Mainz on Saturday, after missing Dortmund’s last two league games with a thigh complaint.

Dortmund are just a point behind Leverkusen and Bayern in third place, meaning they could go top if they beat Mainz.

Elsewhere, last season’s runners-up RB Leipzig hope to continue their mini-revival with a third successive win when they travel to Freiburg, while Greuther Fuerth could become the first Bundesliga club to play in front of a full stadium since March 2020 when they meet fellow strugglers Bochum.

One to watch: Florian Wirtz

Leverkusen wonderkid Wirtz is in blistering form ahead of his side’s showdown with Bayern.

The 18-year-old has been involved in a goal in every single league game he has played this season, chalking up four goals and five assists.

Wirtz is already attracting attention internationally, and former Bayern and Leverkusen star Ze Roberto has predicted a glistening career for the youngster.

“He has that natural instinct to try and try again when things don’t work, and that is essential for long-term success,” the Brazilian told Kicker magazine on Thursday.

999 – Bundesliga goals Freiburg scored in their former home at the Dreisamstadion. The Black Forest club will be chasing their 1000th top-flight goal in new surroundings as they inaugurate their brand new Europa-Park Stadion against Leipzig on Saturday.

22 – Months since Lewandowski last went three Bundesliga games in a row without scoring.

16,626 – Fans expected at Greuther Fuerth’s clash with Bochum on Saturday, the first Bundesliga game in front of a full stadium since the beginning of the Covid-19 pandemic.