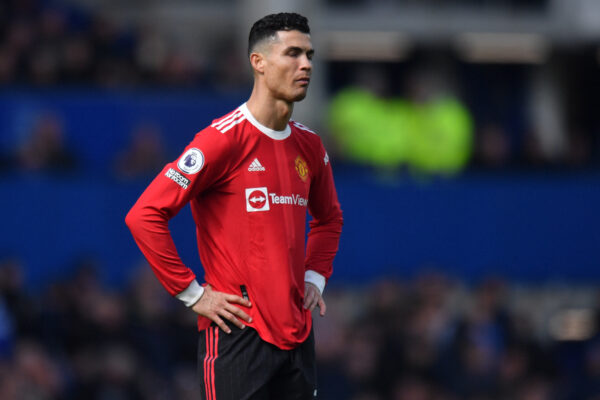 Police are said to have launched am investigation against Manchester United star Cristiano Ronaldo. (Photo by Anthony Devlin / AFP)

Police have launched an investigation after Cristiano Ronaldo allegedly “assaulted” a supporter by smashing a phone out of his hand following Manchester United’s defeat against Everton on Saturday.

ALSO READ: Ronaldo apologises for ‘outburst’ after knocking phone out of fan’s hands

Merseyside Police on Sunday appealed for witnesses after footage on social media showed Ronaldo knocking the phone away from the Everton fan as he left the pitch immediately after United’s 1-0 loss at Goodison Park.

“We can confirm that we are liaising with Manchester United Football Club and Everton FC following reports of an alleged assault at the Everton v Manchester United football match at Goodison,” a spokesperson for Merseyside Police said.

“As players were leaving the pitch at 2.30pm, it was reported that a boy was assaulted by one of the away team as they left the pitch.

“Inquiries are under way and officers are currently working with Everton Football Club to review CCTV footage and are carrying out extensive witness enquiries to establish if an offence has taken place.

The 14-year-old supporter’s mother told the Liverpool Echo that her son, who is autistic and has dyspraxia, was left with a bruised hand after the incident.

Ronaldo issued an apology for his “outburst” on Saturday and invited the boy to watch a game at Old Trafford to make amends.

“It’s never easy to deal with emotions in difficult moments such as the one we are facing,” he wrote on Instagram.

“Nevertheless, we always have to be respectful, patient and set the example for all the youngsters who love the beautiful game.

“I would like to apologise for my outburst and, if possible, I would like to invite this supporter to watch a game at Old Trafford as a sign of fair-play and sportsmanship.”

The Football Association said: “We are aware of the incident and will be seeking observations on the matter from both clubs and the player involved.”