A number of the SA team's medal contenders missed out on a challenging day for the national squad. 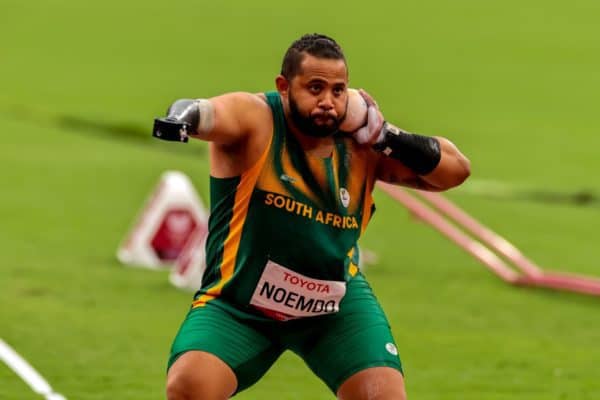 Kerwin Noemdo of South Africa in the final of the men's F46 shot put event during day eight of the Paralympic Games in Tokyo on Wednesday. Picture: Roger Sedres/Gallo Images

Kerwin Noemdo was the best of the South Africans in action on Wednesday, narrowly missing out on a medal in the men’s T46 shot put final at the Paralympic Games in Tokyo.

Noemdo finished fourth with a 15.65m heave, breaking the African record and falling 25 centimetres short of a place on the podium.

After missing the 2016 Rio Games, as the shot put event in his class was not included on the programme, the 26-year-old athlete was satisfied with his performance on his Paralympic debut.

“It’s my first Games, so I can’t be too upset with fourth, but it’s back to the drawing board,” said Noemdo, whose right arm was amputated below the elbow as a child.

“Hopefully in three years time (at the 2024 Paris Games) I can get on the podium.”

A number of the SA team’s medal contenders also missed out on a tough day for the national squad.

ALSO READ: ‘I had to fight for this’ – Du Preez celebrates dream medal

Elsewhere, in the swimming pool, Christian Sadie grabbed fifth spot in the men’s SB7 100m breaststroke final, touching the wall in 1:24.49.
Alani Ferreira was 12th overall in the women’s SB13 100m breaststroke heats in 1:25.01 and she did not progress to the final.

After eight days of competition the SA team were lying 32nd in the overall standings with five medals (three gold, one silver and one bronze).