Take a walk on the wild side

Life in Klaserie Reserve has a richer tempo, tourism is low-impact and focus is on walking with bush-savvy guides. 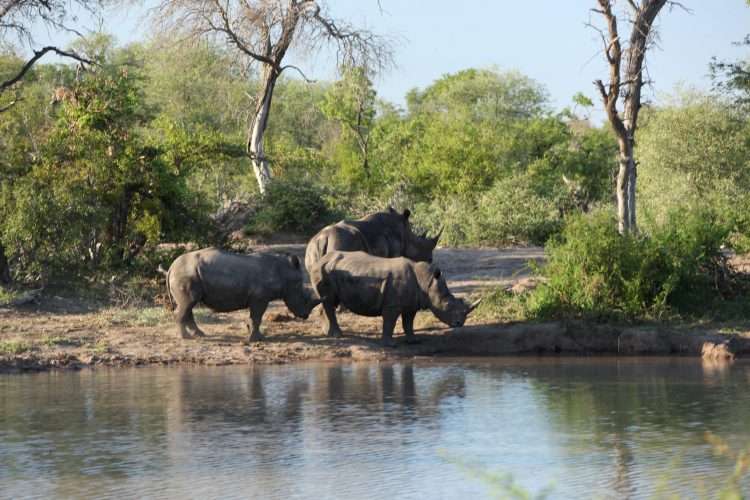 Rhinos drinking from a water hole at Africa On Foot. Picture: Peter Berg-Munch

Exploring Big Five country on foot is a visceral experience, a great way to sharpen your attention. Immersed in this wild savannah matrix where only the fittest survive, you rise in the newly minted radiance of dawn, when the air is still cool, and the heady scent of wild aniseed assails the nostrils.

For a safari that brings you down to earth and face to face with nature, Africa on Foot is about as good as it gets. After all, it’s situated in the remote Klaserie Reserve, north of Sabi Sands and west of Timbavati; vast, unexpurgated bushveld bordering the Kruger Park.

Here life thrums at a richer tempo, tourism remains low-impact, and the focus is on walking with bush-savvy guides, such as Enoch Ngwenya. With 25 years’ experience in southern Kruger, Ngwenya is the consummate safari companion; confident, capable, and bushwise.

In short, just the man you need when traipsing single file in rhino country. Passionate about the wild, Ngwenya can handle an open 4X4 in the roughest terrain and stare down an elephant. However, when we happened upon a matriarchal herd of about 16 and one of the females let out a loud trumpeting sound and made to mock charge us, we did not have to be told twice to get back into the vehicle, sharpish.

“That one can be a mad cow,” explained Ngwenya, steering the vehicle further south to investigate rumours of hyenas mating. We alighted once again, hearts thumping at the prospect of happening on the amorous hyaenidae, but alas, they had retired into their burrow out of sight. However, Ngwenya showed us a large sandy indent where a rhino had spent the night, giraffe dung – scattered like marbles dropped from a height – and taught us how to differentiate between leopard and civet spoor. While we never actually spotted a leopard, we did see a striped civet scything through the bush on a night drive, in search of millipedes and small rodents.

We learn that vultures defecate on their legs by way of sunscreen and, on encountering a red-billed buffalo weaver’s nest, we discover that the polyamorous male – tantric maven of the avian world – takes two and a half minutes to mate with each female in his harem, compared with the mere seconds of most other birds. Apparently, he has even evolved a false penis. Oh my, the stuff you can learn here!

Ngwenya shows us where elephants have stripped the Knob Thorn acacias to feed on the bark, which apparently has healing properties and fights tooth decay. Sadly, the Knob Thorns cannot survive the onslaught. Some trunks have been covered with chicken wire for protection but Ngwenya says this is not a real deterrent. 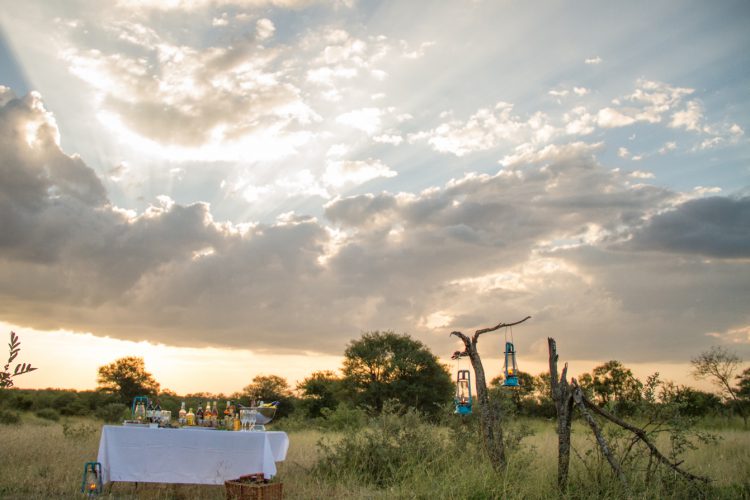 Sundowners under big skies at Africa on Foot in the Klaserie Reserve.

Safely ensconced in the open vehicle, we encountered rhino, hippo and elephants aplenty, but just being in the bush, detached from the rest of squabbling South Africa, was enough to rejuvenate the soul.

Nearly a third of the price of other private lodges in Kruger, Africa on Foot, about an hour’s drive from Hoedspruit, offers the same wild landscape, game drives, adventure and diamond-studded night skies, making it great value for South Africans and foreign tourists alike.

Five chalets include two family units and a treehouse. Salvaged wood sculptures, skulls bleached white by the sun, and old sepia photographs decorate the rustic lounge area, bar and library. Towels and toiletries were provided, our rondavel was comfy and the price of about R3 000 per person sharing includes three tasty meals a day and sundowners on the game drive.