A river runs through it: Enjoy Bangkok by boat

There is an inherent beauty to the experience of travelling on a water bus or one of the other boats that transport tourists in Bangkok. Speed and direction on Bangkok’s water taxis are determined by the captain. Picture: Kulani Nkuna

It may not be Venice, but it provides a viewpoint from which you can contrast the elaborate skyline and the lavish hotels that line various stops along the canals. Most of the boats are built and owned by the men who operate them and these captains rely on this income for their living. The commute from place to place is not the smoothest, as the ride depends on the strength of the captain of the ship on the day.

However it is a thrilling ride, as many of the boatmen’s contraptions are so close to the water that you can reach down and touch it if you want. For fussy passengers, these boats only just pass acceptable requirements, but the adventurous are all too eager to enjoy an unpredictable journey. In the immediate vicinity of the main Bangkok Canal there is frenzied activity, but as you drift away into the distance, there are beautiful buildings and residential homes, many made from wood.

Due to the humidity, the inhabitants of these homes usually relax on their patios with their shirts off. It must be entertaining viewing for locals to see the spectacle of tourists whizzing up and down with their cameras with their eagerness to take in as much as possible.

It is imperative to display street smart when hanging around the Bangkok piers, as the boats don’t usually wait around, although they are reasonably frequent. Tickets are bought on board; it’s a similar system to the South African taxis.

The piers are a little hidden away at times, making for a bit of a challenge if you’re relying solely on a map to navigate the streets of Bangkok. But once you become better acquainted with them, the waterways offer a vast alternative network and a way to explore life along the water’s edge. Boats have become an important means of transport for Bangkok’s tourists.

The river provides contrasts of old and new, with many of the city’s most revered temples stan-ding alongside warehouses.

Going along the Chao Phraya River, the Temple Of Dawn (Wat Arun) is an impressive structure and a good reason to disembark. This is an unspoiled part of Bangkok where Buddhists still practice age-old customs and traditions.

The temple derives its name from the Hindu god Aruna, often depicted with an image of the rising sun. Wat Arun is among the best known of Thailand’s landmarks and the first light of the morning reflects off the surface of the temple with pearly iride-scence.

Although the temple had existed since at least the 17th century, its distinctive spires were only built in the early 19th century during the reign of King Rama II. Attempting to go up the temple steps requires fitness, but if you are determined and reach the top, you will be rewarded with beautiful views of the city and the river.

There are certain myths that go with the structure and one of them states that the central spires (referred to as prang) symbolise Mount Meru in Hindu cosmology. The satellite prang are devoted to the wind god, Phra Phai. 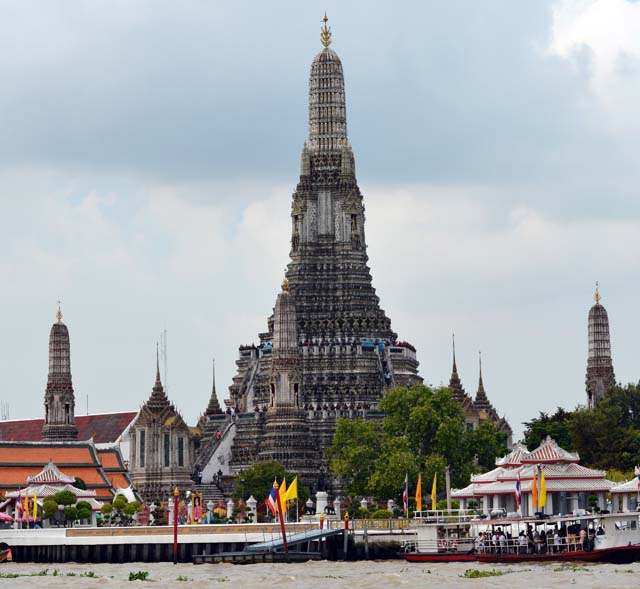 Century). A seasoned guide is

necessary to navigate this much disputed part of the history of Bangkok.