Fiscal sins of the past catch up with Gordhan 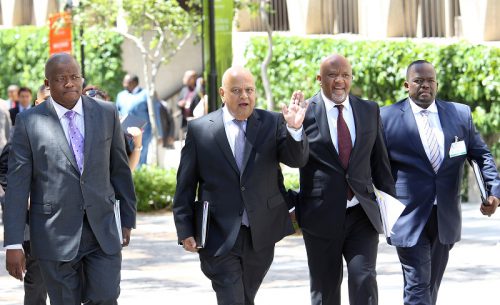 Minister of Finance Pravin Gordhan arrives with members of the National Treasury to present his 2016 Budget Vote Speech in the National Assembly on February 24, 2015 at Parliament in Cape Town, South Africa. Gordhan that he will be cutting government expenditure while still making R870-billion available for infrastructure development. (Photo by Gallo Images / The Times / Ruvan Boshoff)

South Africa’s fiscal sins of the past, particularly those of 2009 and 2010 when government’s high spending ratio reflected the legacy of strong wage and consumer spending growth, appear to have finally caught up with finance minister Pravin Gordhan. With its strong focus on continued modest fiscal consolidation and debt sustainability, yesterday’s budget speech was a clear indication that Gordhan had been given very little room to manoeuvre.

In a period of low economic growth where income windfalls were always going to be unlikely, Gordhan had no choice but to deliver a ‘tough’ budget, particularly to individuals at the upper echelons of what is a very narrow tax base in South Africa. In the words of the minister: ‘To ignore our fiscal targets would result in interest rate hikes, unsustainable commitments and credit rating downgrades. This is a scenario in which short-term gains would quickly give way to financial stress, capital flight and cutbacks in service delivery.”

Largely as a result of lower-than-expected revenue collected in the 2016/17 tax year, the budget deficit crept up to 3.4% of GDP from 3.2% reported in February 2016. In line with Treasury’s intent to arrest the increase in government debt, Gordhan has budgeted for an improved deficit of 3.1% for the coming fiscal year. To achieve this, an additional R28 billion in tax revenue needs to be collected. But despite views that spending should be taxed – and to a lesser extent, income – the minister has opted for the politically safer choice of materially increasing personal income tax.

These developments should be seen against the background of Treasury’s clearly demonstrated intent. The improvement in the primary budget balance (revenue less non-interest spending) over the last four years to an estimated -0.4% of GDP for the 2016/2017 fiscal year, from a deficit of -2.7% of GDP in 2012/13, is a noticeable achievement in a low-growth environment with an excessive unemployment rate and rising demands on state resources. Government spending is still too generous (the consolidated spending ratio is 33% of GDP), but Treasury’s track record in containing expenditure has improved in recent years.

We had hoped for a continuation of discipline in terms of spending. While the minister placed much emphasis on further reform of state-owned enterprises and new measures to monitor public procurement, the recently announced Preferential Procurement Regulations 2017 have raised serious questions about the possibility of either containing costs or maintaining the quantity and quality of spending. They also seem to fly in the face of other commitments made by Treasury. Finally, a new round of public sector wage bargaining is also looming, with important implications for medium-term spending.

Although key building blocks have fallen into place to return South Africa to fiscal sustainability over the long term, it is disconcerting that consolidation amounting to an expected R154 billion between 2015/16 and 2018/19 has done no more than stabilise the debt ratio. Debt stock as a percentage of GDP is expected to stabilise at 48.2% in 2020/21.

Tax increases to fund the shortfall

Since economic growth is paramount for South Africa, the tax changes announced to fund the R28 billion shortfall merit a more detailed assessment. Given increasing recognition of the bias of the current global economic system towards greater wealth disparity, emphasis was expected to fall on wealth taxes – including capital gains tax, estate duty, transfer duty on property and taxes on the income streams produced by capital.

Raising the value-added tax (VAT) rate had been mooted as a practical solution to fill the revenue gap. VAT is recognised as a regressive tax. Still, given exclusions and the zero-rating of specific items, South Africa’s VAT is arguably only modestly regressive. Ultimately, a VAT rate increase is unlikely to be palatable to all stakeholders, and as it turns out, the politicians had the upper hand – no changes were announced on the VAT front.

It could be argued that since SA needs savings to fund growth it would not be favourable to increase taxes on capital gains and the income streams generated by wealth, including taxes on dividends and interest. These taxes are counter-productive considering South Africa’s palpably low domestic savings ratio. Despite these views, the minister has opted to tax the ‘haves’ – with major tax adjustments, including marked increases in personal income taxes:

• A new top personal income tax rate of 45% for those with taxable incomes above R1.5 million.
• An increase in the dividend withholding tax rate from 15% to 20%.
• Limited bracket creep relief, increasing the tax-free threshold from R75 000 to R75 750.
• An increase of 30c per litre in the general fuel levy and 9c per litre in the road accident fund levy.
• Increases in the excise duties for alcohol and tobacco, of between 6% and 10%.

What does Gordhan’s 2017 Budget mean for investors? Foreign investors in particular should be satisfied with the clear signs of fiscal consolidation and discipline which are critical for South Africa’s sovereign credit rating. Against this background, the budget is unlikely to have a major influence on the currency or government bond yields. However, it will do little to stimulate local economic activity over the short term. What is likely to be another year of pedestrian economic growth will not install confidence in the longer term growth prospects of our economy.

The higher than expected burden on private individuals will reduce disposable income in the upper income bracket, which doesn’t bode well for discretionary spending on durable goods. The 2017 budget is yet another headwind for the consumption of white goods, as well as footwear and apparel.

Sugar taxes are now inevitable for this calendar year and will likely be implemented in April 2017. Of note is that this tax could include intrinsic and added sugars, which will be detrimental for the long-life juice products of Pioneer Foods and Rhodes Foods, for example. The jury is still out on the mechanism of taxation for juice concentrates, to which Tiger Brands is more leveraged.

In conclusion, budget 2017 clearly demonstrated the limited manoeuvrability of our finance minister as a result of historically poor discipline – but the buck has been passed to private income earners who are now paying the price for the spending indiscretions of government in 2009 and 2010.