Labour, business and government seem locked in dispute over who should get what, focusing on distribution rather than contribution and wealth creation. 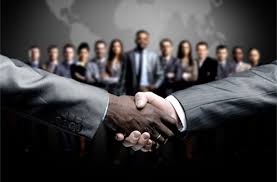 From any point of view, it was a sad day to experience the recent power outages because of an Eskom wage dispute, and to witness angry workers trash Nelson Mandela Bay. Clearly not on the same scale, there is still some similarity between those actions and that of using women and children as shields in military conflict, or children as suicide bombers. Whoever the perpetrators are, they will vehemently defend the ends as justifying the means. To which Adam Smith, the Scottish economist of the 1700s, would have responded: “Virtue is more to be feared than vice, because its excesses are not subject to the regulation of conscience.”

It’s not acceptable to harm or even inconvenience others in the pursuit of self-gain, which in itself seldom qualifies as a noble cause. In the same vein, there can never be any justification for imposing your own needs and wants on customers, clients, consumers or users. It’s a moot point whether modern society has not become too tolerant of this behaviour, often excusing it in the same way we tend to be lenient on transgressors who have had a tragic upbringing.

Yet it is understandable in the broader context. For the most part we have made the pursuit of self-gain the most important, if not exclusive, purpose of our economic endeavours. The term ‘exploitation’ even features in some organisational theory handbooks as an objective when it comes to markets and resources.

It is that concept which inevitably spawns the kind of behaviour we witness on many fronts, of which labour agitation is just one. When these principles are marshalled and expressed through powerful groupings such as labour unions, large corporations, business theory, governments and many other, they often do battle with each other and the fighting elephants crush the grass. It unleashes a toxic trade-off between vested interests; an obscene haggle which culminates in scheming, conniving, colluding, manipulation, theft, corruption, customer neglect, and even societal harm.

This conflict cannot be settled at a centralised level such as Nedlac or centralised bargaining. Solutions there often impose intolerable prescriptions down the line and undermine – instead of encourage – much-needed flexibility. It has to happen at an individual enterprise level where a common purpose can unite the stakeholders and expectations can be managed. Do not blame labour only! Capital interests have been the architects and refiners of the short-term profit-maximisation model and the destructive excesses we have seen in the last few decades. Labour simply follows the same logic, compounded by the commodity status it has been given (largely by itself) and, in this country, by a fall-back to radical cold war rhetoric.

The self-gain, profit-pursuit theory is flawed in many respects. For one thing, it does not distinguish between purpose and motive. Purpose applies to the collective; motive more to the individual. Clearly, the more individual motives are aligned to a common purpose, the more powerful that collective expression will be. But that common purpose will suffer when individuals or stakeholder groups pursue their own conflicting vested interests. The second flaw is the assumption that wealth is generated by the pursuit of those interests. In reality, tangible wealth can only be created by being useful to others. It is then a huge leap to say this happens automatically when people exclusively pursue their own maximum material self-gain; that we achieve the best in us by appealing to the worst – greed or fear. That particular assumption has been proved wrong time and again.

Despite King IV’s ideal of seeing business as an instrument of creating value for all, global emphasis on inclusive economic performance, and the wave of new economic thinking that challenges classic economic theory, we still don’t seem to be close to forging new paradigms. The main participating stakeholders of labour, capital and state seem to be locked in dispute over who should get what. The focus is still mostly on benefits and distribution, rather than contribution and wealth creation.

The latest mining charter proposals are a case in point. This chart, based on the PwC ‘SA Mine’ survey in 2016, shows how misguided they are. 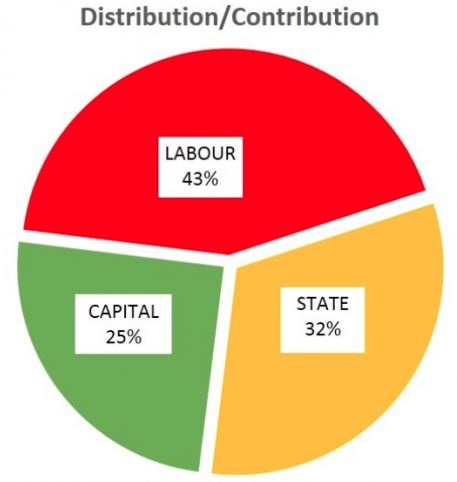 With state and labour being 75% beneficiaries of mining wealth creation, the obsession with changing the capital structure seems absurd. It can be explained only by an assumption that in all things, capital rules supreme. Little in the charter, and nowhere in his comment on the charter, did mineral resources minister Gwede Mantashe explain how it would ensure higher production, mining sustainability and increased wealth creation. Again, and as always, it’s all about distribution rather than creation; about taking instead of giving.

Little in the mining charter explains how it would ensure higher production, sustainability and wealth creation … it’s all about distribution; about taking.

If we want to take the “creating value for all” refrain seriously, not only must we stop the stakeholder trade-off, but we must get them to share an unequivocal common purpose of maximum wealth creation and a common fate in sensible and flexible distribution. I have written megabytes on this theme, but a more recent thought struck me that company boards must be re-examined. At present they represent virtually exclusively shareholder interests, but they could be broadened to include the other contributing stakeholders of labour and state. This will only work if all think entrepreneurially in line with the above common purpose of serving their markets. Frankly this can’t be said for shareholder interests. Perhaps more so!

And let’s not blame ‘the system’! The constant harping on about “capitalism” or “socialism” has become presumptuous, boring and counterproductive. Economics is not about systems, constructs, institutions or numbers, but about an evolution of meaningful and mutually empowering relationships between people. Systems that we impose on that will always fail if the perceptions, assumptions and behaviour of people are flawed.

One of the most intriguing issues humanity has always wrestled with is the deeply profound relationship between contribution and reward; giving and receiving; empathy and survival.

What comes first? Where must the emphasis lie? I’m more convinced that Newtonian cause-and-effect logic is not appropriate. Not only are the two mutually supportive, they are one and the same thing.

That principle is reflected in accounting practice in the value-added or wealth-created measurement – what I have called “the magnificent metric”. It is also the oldest, simplest and most powerful economic principle known to humankind. It captures both contribution and reward in one number – a bit like those optical illusion drawings where two pictures are contained in one, depending on how you see it. And if the whole measures both, then the parts (labour, capital and state) reflect both. We can quibble about proportions, but never to the extent of harming the whole.

So wherein lies the logic of expecting more by giving less – in withholding one’s labour or contribution? A price will inevitably have to be paid somehow, somewhere. The body economic is scarred, and those inflicting the wounds will ultimately pay a price beyond some loss of income. The bigger damage is loss of trust and tarnished reliability. But let’s not exonerate those who for too long have viewed labour as a cost, a drag and a burden to their own slice of the pie.

This thought from American philosopher Waldo Emerson: “It is one of the beautiful compensations in this life that no one can sincerely try to help another without helping himself.”

Imagine adopting that as the supreme principle of economics.