With most stakeholder groups exhibiting some level of antagonism, will Eskom’s new leader be able to slow the debt trajectory? 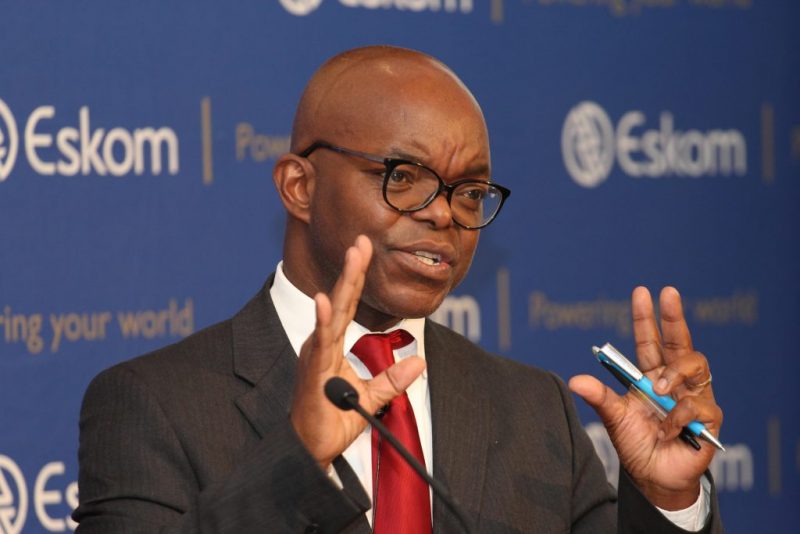 New Eskom CEO Phakamani Hadebe finds it baffling that the power utility’s runaway debt hasn’t been treated as a priority. Among the stand-out figures for the year to March 2018 – irregular expenditure skyrocketing from R3 billion to almost R20 billion. Image: Moneyweb

Eskom’s newly appointed group CEO Phakamani Hadebe put on a brave face when he announced that the group showed a R2.3 billion net loss and received a qualified audit opinion for the year ended March 31, 2018.

He only joined Eskom in January (initially in an acting position, with his permanent appointment announced on May 24), and has been tasked with cleaning up the considerable mess his predecessors left at the utility.

On a standalone basis, the regulated energy utility reported a net loss of R4.6 billion. Net cash from operations dropped from R45.8 billion in the previous financial year to R37.6 billion and irregular expenditure skyrocketed from R3 billion to almost R20 billion.

The scary thing is that the basis for the qualified opinion is the uncertainty that the R20 billion reflects the total extent of irregular expenditure!

Hadebe and his team further made it clear that things could get worse before they get better.

He said Eskom was en route to increase its debt from the current R398 billion to an unheard-of R600 billion in the next four years.

This is in line with the 2017 corporate plan, Eskom’s operational roadmap as approved by the shareholder (represented by the department of public enterprises), Hadebe said.

To understand how much R600 billion is, it helps to write it out:

It’s equal to roughly half the tax collected by the South African Revenue Service (Sars) in 2017/18, according to provisional numbers from Sars. It could build us 20 Gautrain systems, and is more than the R528 billion South Africa budgeted for social grants over the next three years.

Eskom has never before disclosed that its debt could escalate to R600 billion.

It seems the new Eskom board and management costed the existing multi-year corporate plan and came to a total of about R600 billion.

This clearly baffled Hadebe. At the results presentation, he expressed surprise that Eskom’s runaway debt was not a priority under the previous management.

At the current debt level of R398 billion – still some way from R600 billion – the utility is borrowing to service its debt. Nevertheless, the attitude was that “things will sort itself out”, said Hadebe.

At least Hadebe and his new team realise that this debt trajectory is totally unsustainable and has to change.

But how is he going to stop the runaway Eskom debt train?

The first step is to limit planned capital expenditure to R45 billion per year for the next five years. This would represent a saving of R55 billion. It provides for the completion of the Medupi and Kusile power stations, which require R36 billion each, but some network projects will need to be postponed, said Hadebe.

Growth in operating expenditure will be kept below inflation, releasing efficiencies of R11 billion per annum, he added.

He emphasised that this is not enough and that “tough decisions are required.”

Eskom’s strategy is to improve its Ebitda (earnings before interest, tax, depreciation and amortisation) margin to at least 35% over the next three years. 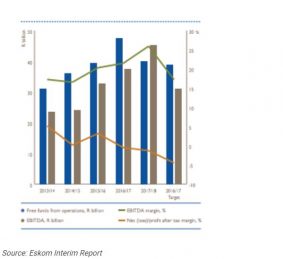 Initiatives aimed at improving this margin include:

Eskom hopes to realise R2.9 billion additional revenue over two years. It is targeting large industrial users in this regard, and says nine deals have already been signed.

This follows the successful implementation of a special pricing agreement with Polokwane-based Silicon Smelters, which saw the group restarting its furnaces after national energy regulator Nersa gave Eskom the green light to charge it a discount tariff for a limited period.

Nersa is expected to approve a similar deal between Eskom and Mpumalanga-based Sublime Technologies this week.

However, these approvals took a long time and Eskom earlier indicated that it would only submit further applications once the final framework for short-term negotiated pricing agreements – which the Department of Energy, National Treasury, the Department of Trade and Industry, and Eskom are working on – have been approved.

However, it acknowledges that only 28 of the 52 payment plans entered into with municipalities in arrears are being adhered to fully and that communities in Soweto resist the installation of prepaid meters.

Eskom has reverted to the policy of investing capital in cost-plus mines, but it will take time for this to pay off in reducing coal cost and ensuring the security of supply. The utility further wants to optimise its logistics cost by migrating coal transport from road to rail.

Eskom’s biggest challenge is to manage its staff numbers and staff cost. In response to the utility’s dire financial situation, Hadebe’s intention was to give staff no salary increases this year. After pressure from the unions and apparent political interference, Eskom is now offering a 7.5% increase. This is way above inflation – and unions are even fighting for bonuses.

It states that it needs regulatory certainty and has taken Nersa’s decision to grant it a mere 5.23% tariff increase in the current year on review in the High Court.

Eskom’s history with the regulator isn’t good and it has consistently been granted much less than it has applied for in the recent past.

While Hadebe and his team are making the right noises, it’s clear that they are fighting a difficult battle. Eskom’s stakeholders – from staff, unions and customers to politicians and the regulator – don’t necessarily support the elements of the plan aimed at stopping Eskom’s R600 billion runaway debt train.

Will Hadebe succeed in slowing it down, or is he already slipping?