The party is most definitely over for SA retail

The first updates for 2019 do not bode well for investors. 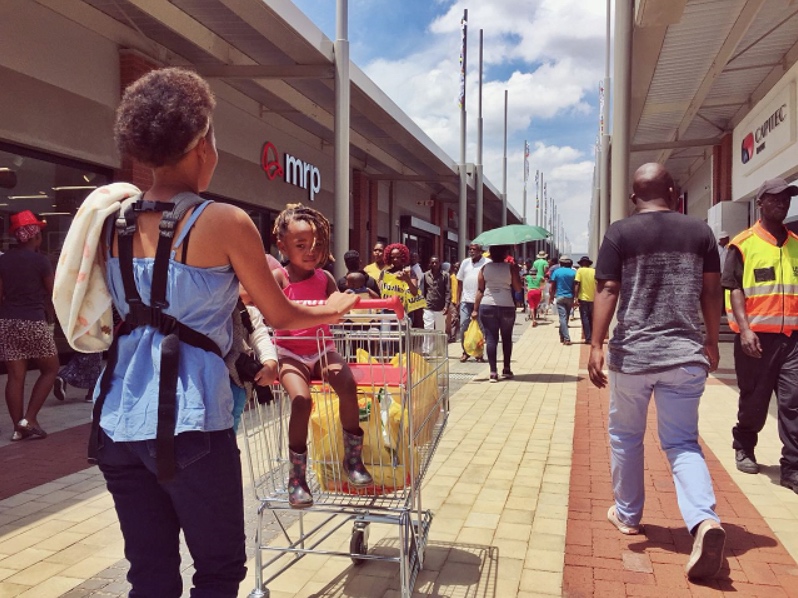 Investors, still under the illusion that the South African consumer is maintaining some semblance of financial health, punished retailer Mr Price on the delivery of a worse-than-expected trading update on Thursday. The share price fell 13.5%, from R255.02 to R221.60.

Woolworths also published a trading update for the six months to end December, but its was marginally more in line with expectations. The share fell 9% from R54.65 to R49.68. In the case of Mr Price, retail sales and other income (RSOI) for the nine months to December 29 grew 5.8% over the corresponding previous period. During the third quarter of the financial year (September 30 to December 29, 2018), RSOI grew 3.5% to R7.1 billion. However, an analysis of retail sales in the period paints a dire picture: total retail sales of R6.7 billion were just 2% higher than the previous period, which admittedly was particularly strong.

But when factored together with inflation of 5.8%, it becomes clear that sales – and, by extension, consumer spending – have regressed. The exception was Mr Price Sport, which grew sales ahead of inflation, possibly as consumers trade down from the likes of Sportsmans Warehouse.

“When a defensive retailer like Mr Price releases an update like this, you must understand that the consumer is under extreme pressure,” says independent analyst Chris Gilmour.

However, when a share is trading on a price-earnings ratio of 22x, then investors have a right to be disappointed. “At these levels the market is not expecting zero growth,” says Andrew Koch, principal at Florin Capital Management. “At a minimum Mr Price needs to be delivering growth of 7% to 8%, otherwise the share price must derate.

While Mr Price has always been an investor darling, Koch says that Pepkor is the more attractive of the discount apparel retailers.

“Pepkor is cheaper, and while there is a lingering uncertainty around the share, I’d say that the ‘goggos’ have probably worked their way out.”

In South Africa, Woolworths fashion, beauty and home sales declined by 2% (comparable stores were 2.4% lower). However, the retailer noted that, unlike Mr Price, sales in the second quarter of the year have shown positive growth. Once again food came to the rescue with sales growing by 6.3%, with volume growth driven by low inflation, higher levels of promotions and price investment.

“These results are to be expected in the current environment,” says Koch. “It’s tough – consumers have absorbed the Vat hike, a rising fuel price, there is no economic growth – that makes it difficult for retailers to grow. This is unlikely to change until we see economic growth and growth in employment.”

These numbers bear no correlation with the retail numbers reported by Stats SA this week. According to the latter, sales were up 2% in the three months to the end of November compared with the same period last year. “It is evident that the JSE retailers are having a torrid time, yet this is not the reality reflected by Stats SA numbers,” says Gilmour. “It makes the numbers from Stats SA meaningless.”

As far as Adrian Saville, CEO of Cannon Asset Managers, is concerned, the party is largely over for retailers and the year ahead will be difficult. “Retail space growth in South Africa has grown out of all proportion to GDP growth. In SA the growth in retail space has not been accompanied by a commensurate growth in GDP or income. This tells you that people have borrowed to fund that consumption – rising consumption is not coming from rising living standards.”

Growth in retail selling space vs growth in GDP: SA is a relative outlier 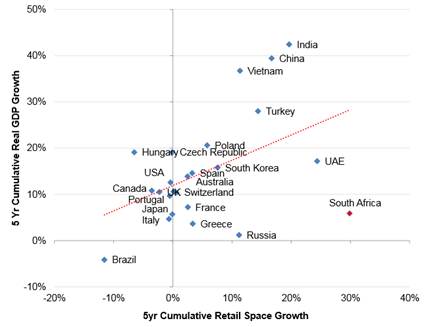 While the debt level of the average South African family is deeply concerning, the fact that South Africans are spending rather than saving is more worrying, he says. “We have a deep structural problem in SA. SA’s national savings rate is 15% of GDP, and our household savings rate is zero.”

This overt consumerism is in line with trends in other deeply unequal societies – Colombia, Argentina or Brazil for instance. People’s aspirations are not to build a balance sheet or save for retirement – they are to increase their ‘outward’ or visible standard of living. This is across all wage brackets, he says. However consumers have exhausted their balance sheets.

The bottom line, says Saville, is that the phenomenal growth of the retailers over the last decade or more is unsustainable.

While a savings rate of 15% sounds meaningful, it’s paltry. “Our savings, together with some foreign investment, supports South Africa’s capital investment rate of 18%. This is just enough to nudge ahead of the depreciation rate on invested capital. To achieve a growth rate of 5% would require an investment rate of 30% – and we do not have the savings to fund that.”