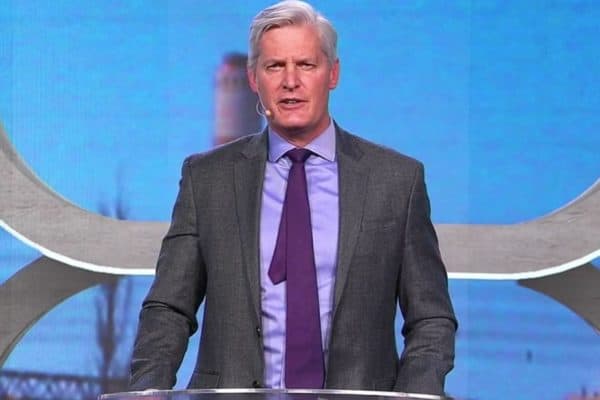 The intricate balancing act power utility Eskom is now being forced to strike, with mounting pressures of an embattled economy coupled with climate change, means the country’s only chance of success is to rejuvenate the industrial economy.

This was one of many thought-provoking points explained by Eskom group CEO André de Ruyter during the annual Hendrik van der Bijl lecture on Tuesday evening, facilitated by the University of Pretoria and the South African Academy of Engineering.

De Ruyter’s sobering speech emphasised not only the need to reinvent the country’s economy, which presents enormous potential but has been hindered by past blunders, but also to embrace and move forward with renewable energy.

Not only for the planet, but also in an effort to create and sustains jobs for the future.

Although not an easy journey, de Ruyter said greener electricity supply was a no-brainer.

He acknowledged the daunting fact, presented by South Africa’s unnatural reliance on coal-fired power stations for electricity generation, but said if we did not heed the call to “turn coal shovels into turbine blades”, whole industries risk total collapse.

“We are vulnerable to climate change. And change is accelerating faster than most negative modelling predicted.”

Agriculture, for one, will see land being too hot and dry for farms to cultivate anything of value.

South Africa’s carbon emissions are 25% more intensive than China, double the global average, and contribute to a quarter of Africa’s total emissions.

And with the world penalising heavy emitters more each year, the country will be forced to fork out funds it does not have, and risks losing more investor confidence, as well as having to cough up carbon export tax as initiated by the European Union by 2023.

Even insurers are becoming increasingly hesitant to cover coal-based projects, and investors are scarce.

Coal and nuclear projects take from 12 to 15 years to complete, compared with photovoltaic (PV) projects, which can be up and running in 24 months, and wind in 36 months.

Persisting with coal will only result in “more punitive measures”, which is why Eskom’s Just Energy Transition or JET initiative has been put in motion, to repower or repurpose coal plants reaching the end of their lives, de Ruyter explained.

The Komati power station is seen as a pilot project, with it closing down in October 2022.

De Ruyter said repurposing had already begun here, with the site being prepped for a 500 kilowatt agricultural voltaic plant, and an assembly grid for microgrids and fabrication facilities.

The same will follow with Grootvlei, Hendrina and Camden plants, which will be reaching the end of their lives by around 2025.

But we must not “try to boil the ocean” – rather, the country must focus “on areas with a right to win”, where we have the skill and advantage.

The plan is for the country to use funds which would have been required to pay minimum emissions standards penalties to build renewable capacity.

This means Eskom paying R300 billion on renewables, money it does not have, de Ruyter conceded.

“We need to find a balance to phase out coal without socioeconomic disruption, while moving to a green, cleaner economy.”

He said Eskom was keen on exploring investing in the EV market by using their own demand for light delivery vehicles to grow demand and enable investment.

“Eskom is keen to act as an anchor market for EV.”

There would then also be a possibility for the country to produce EVs for export, and emulate the existing petrol and diesel-focused motoring industry to produce components sustainably.

Not looking into options such as these would serve as barriers for economic growth, he emphasised.

Renewables would also be able to deliver around 300,000 jobs over the next decade, but only if they are invested in seriously.

Workers would be reskilled and upskilled to become training installers and operators of renewable energy plants.

“This coupled with the acceleration of research and innovation in battery and digital technology must be embraced”.

Luckily, prices for renewable energy are declining, and due to their short time frames to be able to produce electrons to power into the national grid, this would also eliminate the risk of load shedding.

“There are a range of incentives, but we have to grow the economy to realise this, and ensure investor confidence.

“The economy was built on cheap coal, cheap energy and cheap labour to power a primary commodity economy.

“Structural underpinnings haven’t changed enough, and are not suited to global transition.”

Reversing deindustrialisation and pivoting towards a cleaner future can only mean “enormous industrial opportunities”, he said.

READ NEXT: Eskom may have found a buyer for their ‘impaired’ R840 million Kusile flats