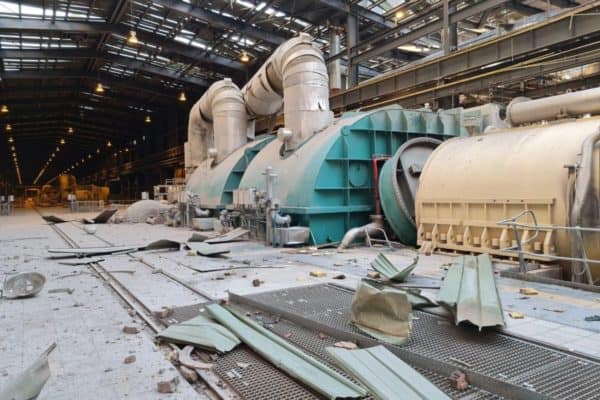 The aftermath of a devastating explosion at Medupi Power Station on 8 August 2021. Picture: Twitter/@chrisyelland

The Department of Public Enterprises (DPE) has confirmed that preliminary investigations into the explosion at Eskom’s Medupi Power Station indicate that the incident was a result of standard procedures not being followed.

DPE director-general Kgathatso Tlhakudi briefed Parliament’s portfolio committee on public enterprises on Wednesday morning, where he gave an update on the Medupi unit 4 explosion that occurred on 8 August.

The explosion took place at the coal-fired power plant near Lephalale in Limpopo just before 11pm on the day while hydrogen was being displaced with carbon dioxide and air, in order to find an external leak.

This ignited, and resulted in the explosion. The explosion resulted in extensive damage to the generator and other components within close proximity.

During the briefing, Tlhakudi told the committee that the full extent of the damage is still to be determined, adding that investigations currently point to negligence being behind the explosion.

“What has been determined is that the procedures in terms of purging were not properly followed. Those that oversaw that operation have been suspended [until] the proper investigations are confirmed,” the director-general said.

Eskom previously indicated that the employees were suspended, among other reasons, because it believes there was “a deviation from the procedure for carrying out this activity”.

Meanwhile, Tlhakudi further said that an inspector of machinery has since completed the site inspection, while a recovery manager has also been appointed.

“The inspector has been on site and she is doing her own investigation. Rotek [Industries] which is a part of Eskom is also doing some work in order to un-assemble [the plant] to assess the damage caused,” he said.

The director-general also confirmed that the original equipment manufacturer (OEM) has been involved in the effort to repair the unit and return it to service.

Eskom CEO André de Ruyter recently told News24 that the explosion could add up to R2 billion to the extensive power plant’s bill, and could take up to two years to mend.

The results of an investigation are not yet complete, which means it could cost even more money.

There was talk of taking unit six of the Kusile Power Station and moving it to Medupi, independent energy expert Chris Yelland told Moneyweb.

However, nothing had been confirmed yet. This would save time, but it could potentially cost Eskom more than ordering a new generator and installing it, he said.

The reason a generator takes time to be replaced is because it is a bespoke design specifically made for the Medupi project.

It also has to be shipped from France.