South Africa should learn from Brazil, where the availability of higher education has been significantly boosted by a rapid growth in private higher education institutions, argues Ann Bernstein. Bernstein is executive director at policy research and advocacy organisation, the Centre for Development and Enterprise (CDE). 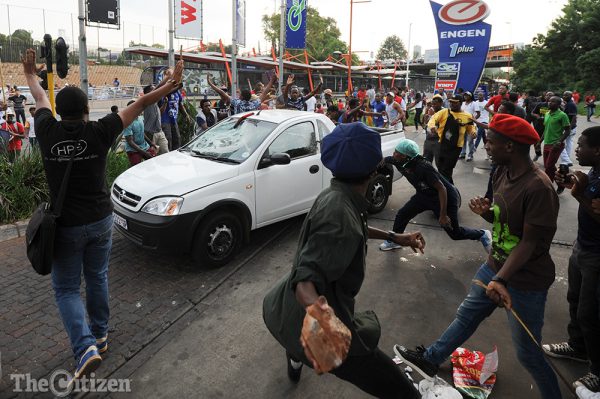 Wits students attack a car that ran through the human blockade on Empire road, 19 October 2015, outside the University of Witwaterstrand. Picture: Alaister Russell

“There has been an enormous expansion of demand in SA and what can be more important than helping more people to get quality educations? The lack of competition among private higher education institutions in South Africa – and the limited capacity and resource of public institutions – builds a case for bringing more market actors into the sector,” Bernstein tells Moneyweb.

“Why not put out a big tender globally and entice global players to come and teach here at a price we can afford?”

Bernstein argues that work would need to be done around maintaining quality standards and level playing fields across both public and private institutions, but maintains, “we need to think a lot harder about this and debate it much more”.

Certainly, recent protests at Wits University over fee increases for 2016 – which successfully suspended those increases and have spread to other campuses – point to a much larger challenge facing South African society: the availability and accessibility of higher education and training.

Writing in 2012, the previous director of the Brazilian government’s Agency for Post-Graduate Education (CAPES), Professor Claudio de Moura Castro, said that the private sector’s access to finance, skills and managerial expertise was used to great positive effect in Brazil, where 64 of the top 100 institutions are private.

“Once government improved the regulatory environment – from impossibly restrictive to tolerable – the private sector expanded rapidly, and has made a major contribution to expanding post-schooling access in Brazil,” he writes in a paper produced by the CDE. In 2012, 75% of higher education institutions in Brazil were private, up from 25% in 1995.

Opening the market up in this way has also led to a number of educational and vocational programmes provided or paid for by firms, benefitting some 40 million students, according to De Moura Castro.

Student loans raise another set of problems, but De Moura Castro provides compelling examples of the role of the private sector in improving access to higher education and training. Read the paper here.

Private education groups, Curro and AdvTech have expanded primary and secondary schooling offerings, often at a lower cost than other private schools. While Curro says that higher education is not a primary focus area at this stage, AdvTech is expanding its offerings, with new campuses expected in the next few years for Varsity College and two new Rosebank Colleges opening next year.

That’s in addition to expanding capacity on many campuses and offering qualifications on a distance learning basis, says Dr Felicity Coughlan, director of the Independent Institute of Education, which is responsible for academic leadership and governance in the AdvTech Group.

Coughlan explains that private higher education institutions are subject to the same quality assurance and accreditation requirements as public providers (therefore offering degrees at the same levels), but may not be referred to as universities.

“South Africa needs a diverse institutional landscape and would benefit from better cooperation between the [public and private] sectors,” she argues. “The public sector is not going to be able to keep up with demand and shouldn’t be expected to. Proposed legislative changes that may make it easier for ‘university type’ private higher education institutions to claim that status will help the public make more informed choices, but the options already exist and are growing,” Coughlan adds.

She argues that vocational and diploma-level education are incorrectly undervalued, so that students may enrol for degrees based on their perceived aspirational value rather than the match between the student and the qualification.

“As a result, skills the country desperately needs at levels other than degrees are not being produced at a sufficient rate. More attention has to be given to increasing the perceived value of technical, vocational and diploma level education as the value to the individual and society is unquestionable,” says Coughlan.