Standing with their arms outstretched under the endless blue sky, the sun on their faces, a small group of women take a yoga class, looking out at Lisbon's tightly-packed skyline from the rooftop of a city centre hostel.

Often referred to as the “City of Seven Hills”, Lisbon is full of red-tiled buildings with spectacular views over the undulating Portuguese capital as it slips down towards the Tagus River.

“It’s all about the views in Lisbon,” said Katrin Heuser, 39, who started offering rooftop yoga classes at the This Is Lisbon Hostel when she moved to the city from London two years ago.

She now holds classes at four other locations with sweeping views of Lisbon too with the aid of two other teachers.

One regular student, 30-year-old Greek IT consultant Maria Anastasiadou said the classes were “completely different” to those held indoors. One of Europe’s sunniest capitals, with 290 days of sunshine a year, Lisbon’s climate is well-suited for rooftop activities

“Your body and mind connects with the environment around you and the sun,” she said.

“You start feeling the sun and air touching your skin. Your mind gets clearer, in a strange mix with the noise of the city. All your senses are awake.”

Lisbon’s climate is especially well-suited for rooftop activities. The city on Portugal’s western coast is one of Europe’s sunniest capitals, with 290 days of sunshine a year.

“It’s the perfect place for doing activities on rooftops because of the weather,” said Phil Llic, who since June has been showing movies every Thursday night on the rooftop of the Topo Chiado restaurant-bar.

The venue, which opened in 2016 on the back of the ruins of a convent, affords views of the elaborate, turn of the century Santa Justa Lift and the medieval Sao Jorge Castle, two historic Lisbon landmarks. Under the stars, customers can admire the view at the same time as watching a cult film on a large screen while sipping drinks and lounging on one of the 90 deck chairs.

It regularly sells out.

“Its all about the experience, it’s not even really about the movie,” said Llic, 31, who also moved to Lisbon from London two years ago, like many before him drawn by the warmer climate and slower pace of life.

He and his business partner, Chris Wood, a 34-year-old from the English northwestern city of Manchester, plan to expand their movie screenings to more rooftops next year.

The 10-story Four Seasons Hotel Ritz at the end of 2016 completely refurbished a 400-metre (1,300-foot) outdoor running track on its roof and set up gym equipment there to allow guests to work out outdoors while overlooking the city. 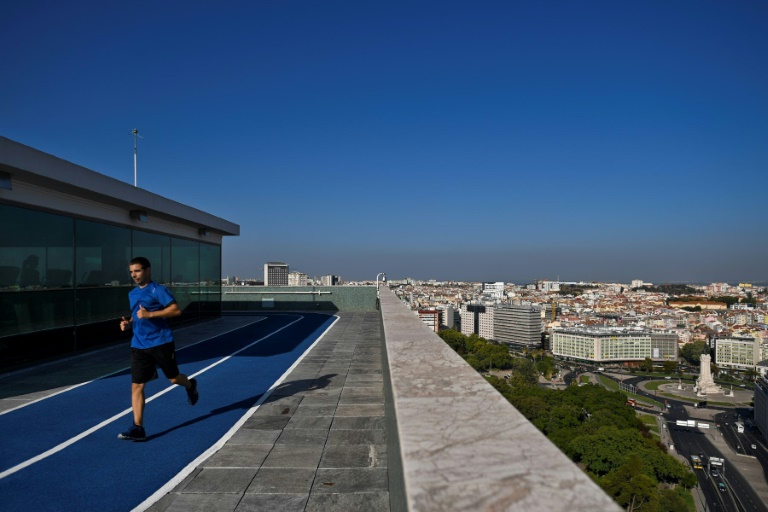 The boom in upgrading rooftops for leisure activities comes as Lisbon is experiencing a surge in visitors that has sparked a drive to renovate buildings in the city’s picturesque old town.

Lisbon had 3.9 million foreign visitors in 2016, a 9.7-percent jump over the previous year.

Its rooftop activities are popular among locals. But Heuser, who is originally from Germany, said many of her rooftop yoga students were foreign visitors, especially in August.

“They like the idea, they think it is a fun thing to do and a good way to enjoy the view,” she said.

“At the time we decided not to promote the space, to avoid the ‘hype’ about rooftops, but we still managed to build a regular customer base,” she said.