If you can’t take the heat…

One thing is for sure. You either give yourself over to The Heat's obnoxious wicked sense of humour, or you stay the hell away. 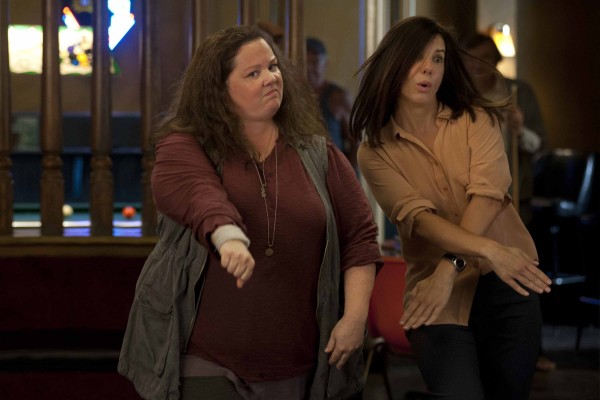 Melissa McCarthy and Sandra Bullock in The Heat.

This is not a film for prudes or sophisticated sensitivities. It is vulgar, bold and naughty and doesn’t give a continental damn if you are shocked or offended. If you venture onto the mean streets of Boston, don’t cry when you get hurt. Paul Feig and his two main actresses punch you on the nose and when it bleeds don’t even offer a tissue. It’s that kind of visit to the comedy ER.

You will often hit speed bumps during this wild ride which could send your dentures through the windscreen, should you wear any. And it will miss the occasional stop street or dash across a railway line with an approaching train destined to slam into you. But boy, do you enjoy being taken out of your comedy comfort zone and thrown to two lionesses who devour you without any anaesthetic.

These two bold women often give you the middle finger when you’re not looking, and even sometimes when you are! So beware: crude language, gross-out situations and kick-ass dialogue seldom heard from the mouths of ladies, fly across the screen with the speed of ricocheting bullets, and once you’ve been wounded and become use to the pain, the film grabs you behind the neck and tosses you about.

An uptight FBI-agent (beautifully played by Sandra Bullock) is sent to Boston where a foul-mouthed, abused and angry Boston street cop (Melissa McCarthy) has to arrest a drug lord. This combination is one of the most hilarious, over the top yet successful odd couple-pairings since Nataniël and Gordon Ramsey.

You shudder from laughter, cringe at the language, get a few knock-out punches on the chin, yet, like a punch drunk boxer, rise for more. Like The Internship, it bristles with energy, there is an amazing chemistry between the main actresses, and a laugh out loud script. But it comes at a price. This film takes no prisoners and some readers may find it offensive and even shocking.

Having said that: Melissa McCarthy excels as the tough Boston cop who wears her gun like an extension of her crass personality. She portrays a woman who has always been abused by her colleagues. She may be “one of the guys” at the station and tolerated because she can do the job, but under that tough exterior is a woman who has always felt inferior. It is only when an uptight female partner, who matches her toughness, arrives on the scene that she realises her potential.

Sandra Bullock, with her tense attitude and deadpan delivery of throw-away lines, is in fine form and gives McCarthy ample support. So go if you dare. It is hard-hitting comedy, like walking over hot coals yet laughing at your burnt soles. But in the end you may just giggle, snicker and laugh like a drain in spite of the vulgarity.

The film has a warm heart that pumps entertainment.