Nothing is ever completely black or white. 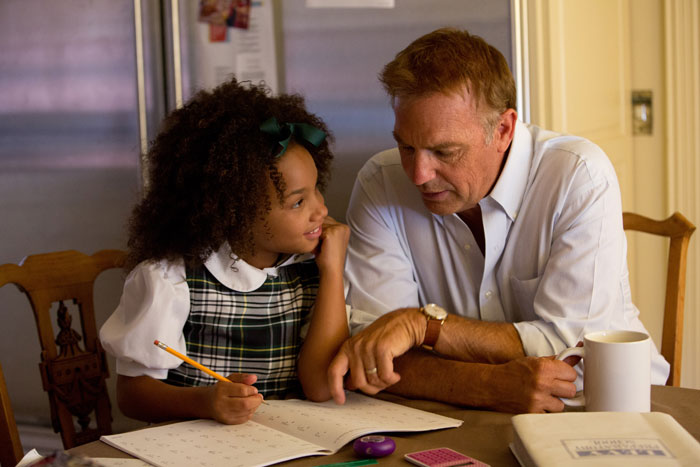 It is the grey area in between that interests Mike Binder, director of this touching and courageous film which dares to sidestep political correctness and focuses on the real issue at hand: a white man anxiously trying to make a better life for his granddaughter – who just happens to be black.

He tries to save her from what he perceives to be an unworthy father, but in the process finds himself slap bang in the middle of a battle which becomes all about race.

The film demonstrates how he tries to find a better life for her and in the process inspires the child’s real father to accept his real responsibility.

Based on a true story, many readers might find this one quite gripping and even compelling to watch, especially from a South African perspective in which a preoccupation with race unfortunately still dominates the headlines.

In Black or White Elliot Anderson (a back-in-top-form Kevin Costner) seems to have it all. A great, if formal, house in which he can give his granddaughter everything she desires – especially money, space, status, safety and more than enough love. But her grandmother, beautifully underplayed by Octavia Spencer, also wants the best for the child: a simple life, the warmth of paternal grandparents and, above all, friends she can identify with and feels comfortable with.

Will this poor child, who is literally torn between two worlds, manage to survive this battle, while all she wants is the love of the people who are looking after her?

In an Easter holiday season dominated by the spectacular opening of Fast and Furious 7 – which is more a teenage video game than actual cinema – many readers might find an escape and even solace in this intimate movie offering. It is one of those small, introvert, even timid movies that hits a few theatres before disappearing off the circuit forever, not being able to compete with the blockbuster machine of the Hollywood superpower monster action movie.

It is the kind of offering you watch on a quiet Saturday afternoon when all the other cinemas are bursting with teenagers screaming their heads off at inane entertainment and munching their way through countless boxes of popcorn.