Dlamini said it was an honour and great experience to play Sarafina in its 30th anniversary production. 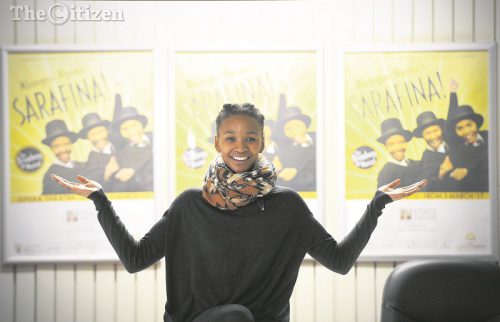 Our first meeting is brief. Pretoria’s congested traffic has been especially cruel and I’m running 30-minutes behind schedule to meet Noxolo Dlamini, the young actress asked to play Sarafina in its 30th anniversary production.

Dlamini is understanding – but it’s doubtful she’s pleased with my tardiness: actors are renowned for being on time. She’s due on stage in a few hours and still needs to sit through hair and makeup. It’s a quick introduction. My being late means we’ll have to rethink our time together – and opt to take photos first and ask questions later.

“We’ve been rehearsing for five weeks, usually Sarafina! rehearsals can go for four months,” she mentions as we move around the labyrinth of corridors at the State Theatre.

Her relationship with the material is much the same as many younger South Africans who did not grow up in apartheid South Africa.

“The first time I watched Sarafina! was probably in primary school. I enjoyed it because of the singing and dancing, but I don’t think the message was very clear then. I watched it again in high school, where I understood it more. It was painful…

“I learned about the apartheid era in primary school, but seeing it just gave a clearer picture. I loved the story: I was seeing a young black girl portrayed as a hero. She was smart, brave and admired by those around her.”

Leleti Khumalo aced her stage and film performance as Sarafina, and Dlamini is not phased by any comparisons – good or bad.

“It is inevitable (comparisons). She is the original Sarafina, and has been everyone’s favourite, myself included.”

It’s rare to see this kind of maturity in a young stage star – and you can only guess her nonchalance helped her snag the role.

But she remembers her first audition. “Something in me was feeling really positive about getting the role. I think my first audition and the dance call went extremely well. But I tried not to get ahead of myself,” Dlamini confesses.

She’s particularly moved that Sarafina! creator (and also the musical director and director for the latest revival) Mbongeni Ngema trusts her to play the role.

“It has been such an honour and such a great experience. First, it was nerve-racking, but then I realised he trusted me to play this role of Sarafina. I absolutely love live performance. I love the storytelling aspect of it.

“The set is not extravagant, therefore the performance is heightened and very physical. We use our bodies and voices to tell the story,” she says.

Sarafina! is renowned for putting performers through their paces. From toyi-toyi to extravagant dance numbers – the whole show is an exercise in physicality.

“Rehearsals were hectic – vocally, physically and emotionally. I think my entire body took strain, but the knees and legs are probably the most exhausted. There comes a point where you feel like you are running out of breath. What the director constantly reiterates is breathing before doing anything, especially singing.

“From rehearsals, we are taught to breathe deeply, and he can tell when you’re singing if you have breathed or not. After a big dance number or doing something really physical, breathing deeply really helps to calm you down and prepare you to sing or speak.

“Breath support is very important. Especially, to preserve your voice. We still continue to practice this in warm ups,” Dlamini says.

Performance aside, Sarafina! also deals with real world issues, which makes it a taxing role. Dlamini is, after all, part of a generation still feeling the after-effects of apartheid.

“Recently, we had FeesMustFall, another struggle that school children went through, fighting for their voices to be heard. FeesMustFall is a product of what has happened in the past. Many people’s parents are not able to send them to school as they do not have that money.

“They themselves grew up impoverished, caused by the laws of the past government,” she says.

That relevancy is why, 30 years on, Sarafina! remains an important stage production when South Africa is again dissecting itself.

Sarafina! reminds us again that freedom is coming tomorrow – and it’s a thrill to see someone like Dlamini leading the charge.