Bongani Fassie allegedly untruthful about getting his mother’s millions

Brenda Fassie's son claims to be living the good life, but his landlord reportedly claims he's behind on rent. 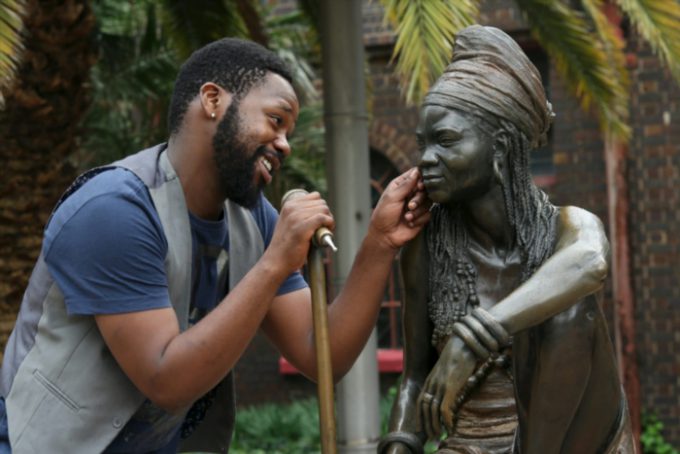 Bongani Fassie poses next to a statue of his mother, Brenda, in Newtown on March 13, 2013, in Johannesburg, South Africa. Bongani will perform 'with' his mother, thanks to holographic technology. (Photo by Gallo Images / Sowetan / Vathiswa Ruselo )

According to tabloid paper Sunday World, Brenda Fassie’s only child Bongani has been “lying” about all the millions he’s received from her estate.

According to their report, the hip-hop artist can’t even pay rent and has been threatened with eviction. However, the musician denies this, saying that his days of being penniless are indeed behind him.

He told The Sowetan earlier this week that he was now living the good life and did not have to do music any more after his mother’s R20 million estate was paid out to him.

“How do you think I have been surviving? I don’t even have to do music because I feel like she has left such a strong legacy,” he said.

However, according to Sunday World, he is still three months behind on his rent and faces eviction from his Johannesburg apartment.

The paper spoke to his supposed landlord Landsford “Livas” Japhet about an amount of R34000 allegedly owed by Bongani. Japhet declined to comment after indeed confirming to the paper that the artist was behind on rent.

The paper, however, said they had been told about Bongani’s financial problems by a record company official, who said the artist was being untruthful about his inherited millions.

“How do you publicly say you have R20 million and you don’t even feel like producing music because you are rich while you know that you are struggling?” the source was quoted as saying.

He added “that boy has nothing, he has no car and has no house. The landlord has been phoning people who are close to him and asking them to pay for his rent.”

Another alleged source also told the paper he knew of another friend of Bongani’s who now refused to lend the man any more money because “you give him money today and tomorrow it’s finished on things that he can’t even point at”.

This week Bongani said that his mother’s estate had been settled 14 years after her death.

She died of a cocaine overdose and left her estate, reportedly worth more than R20 million, unsettled. A legal battle ensued between Bongani, Brenda’s record label, and music producer Chicco Twala, with Bongani fighting to have royalties and funds generated from Brenda’s music career released to him.

In 2010, it was reported how former director of South African Recording Rights Graham Gilfillan and Twala nearly came to blows over Brenda’s money. They had appeared at the Johannesburg High Court and had discussions about where the pop star’s money had gone.

Twala had been accused of siphoning R650 000 of Brenda’s money into his own account instead of depositing it into the late singer’s bank account. Gilfillan is said to have enriched himself with her money and was paid R50 000 a month while Bongani struggled to make ends meet.

Towards the end of 2010, Bongani filed papers with the Pretoria High Court and declared he was destitute. He requested that the services of the executor be terminated and he take over as he had not been informed of the process to appoint the executor of the estate.

Ghetto Ruff record label owner Lance Stehr who lived with Bongani and managed the group Jozi, said at the time that he could no longer handle Bongani’s drug use. About overcoming a dark period in his life, Bongani recently said his two children had helped him put his act together and conquer depression.