7de Laan’s Eugenie, who is really a Paralympic wheelchair tennis player is on her way to the Tokyo for the 2020 Summer Paralympics. 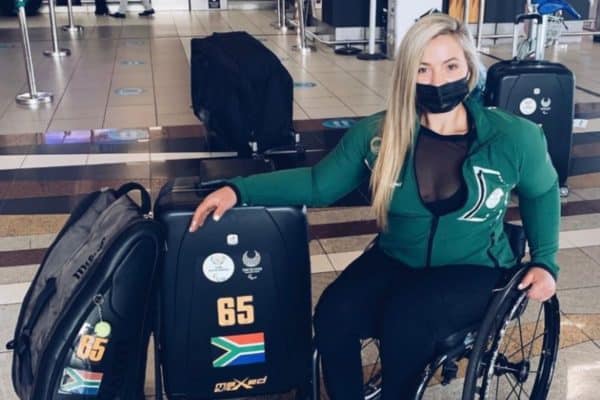 Venter, who took up wheelchair tennis in 2014 took to Instagram with a photo of herself at OR Tambo International Airport, saying that things are getting real.

On 31 July Venter posted on Facebook: “Tokyo 2020 – Qualified. 7 Years ago, my only dream was to qualify for the Paralympics and finally my dream has come true. So many sacrifices, hard work and a lot of disappointments, but I finally get to live out my biggest dream. I can’t wait to represent my country on the world’s greatest stage.”

READ: Diaan Lawrenson talks about being a wife, mom and working woman

Venter and her family were involved in a head-on-head collision 17 years ago, which left her paralysed at the age of eight. She also lost her father and her eldest brother in the accident. Even though she broke her back, among other things, and was paralysed from the waist down, she has come out stronger and today she is heading for gold.

She says tennis saved her and now, she doesn’t believe in limits. In a YouTube video from her channel, she says: “I am an athlete. I am able.”

It is also this attitude that landed her a role in the popular South African soapie, 7de Laan. She played the role of Eugenie, who supported Rickus after he was in an accident that left him paralysed. In a blog post about her first acting gig, Venter writes: “It is safe to say that this experience was one that was completely out of my comfort zone and one of the biggest challenges I have faced this year [2019].”

Her 7de Laan team has been rooting for her all along and have been posting motivational posts on Facebook, wishing her luck at the Paralympics.