Strydom’s ride Made To Conquer heavily penalised for second place in Durban July, while Undercover Agent looks best in the Champions Cup. 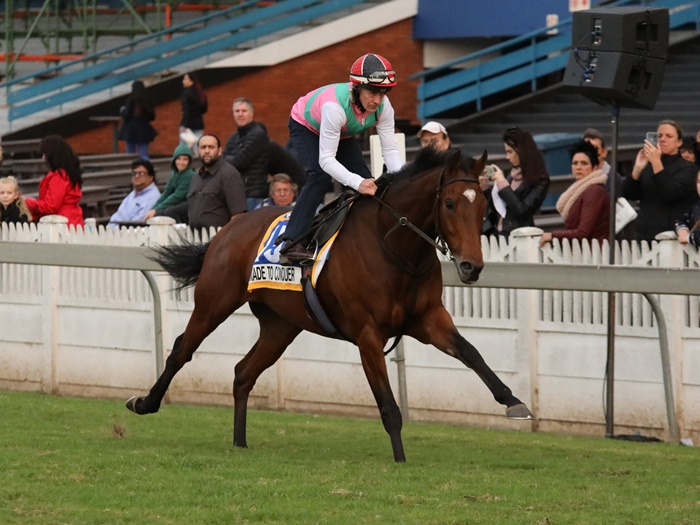 PENALTY. Piere Strydom will ride Made To Conquer in today’s eLan Gold Cup at Greyville, but is concerned about the 3kg penalty his mount received for finishing second in the Vodacom Durban July. Picture: Gold Circle

Today we are back in Durban for the final feature races of the season, which includes the R1.25-million eLan Gold Cup. We all want to win the big races and this Grade 3 event is one of them. We all hope to shine on the day, especially with 10 feature races – including four Grade 1 races – on the card. But this is Greyville and it is a course where luck often plays a big part.

It is always difficult to predict the outcome of a stayers’ race, especially in a big field. I will be riding Justin Snaith-trained Made To Conquer who unfortunately got a 3kg penalty for running second behind Do It Again in the Vodacom Durban July. I’m hoping he has made further improvement which he needs to do because he is now 3.5kg worse off with Strathdon who he beat by a short head. With that turnaround over this distance it could be a tough task. His form of late is exceptional and I’m hoping to get surprised.

The main fancies have to be Strathdon, One Direction (both from the Snaith yard), It’s My Turn, Hermoso Mundo and Ballymaine so go with three or four of them for your Place Accumulator. For the Pick 6 put in all of those, as well as my ride, Made To Conquer.

We also have the Grade 1 World Sports Betting Champions Cup where the old brigade are taking on the young guns. Of the old guys Captain America and Sail South stand out and from the young guns, Undercover Agent, Eyes Wide Open and Tap O’ Noth looking to topple them. Undercover Agent is my first selection of the bunch.

The next Grade 1 is the Mercury Sprint where many horses have chances. Over 1200m the draw will play a big part so I’m leaning towards Champagne Haze, Rocky Valley, Sunset Eyes and Pinnacle Peak. I’m riding Bishops Bounty and on current form I would be delighted with a place.

The pair of two-year-old Grade 1 races are over 1600m and the draw is once again vital. The horse we all have to beat in the Premiers Champion Stakes is Soqrat. Not only has he got the best form but he has raced at Greyville and is drawn No 1.

The Thekwini Stakes is for fillies and the three main contenders are Return Flight, Dagmar and Railtrip. I’m riding Storm Destiny who is not far behind those three on the last run but she has a shocking draw.

We race at Turffontein tomorrow and we kick off with a Juvenile Plate over 1600m on the Standside track. The two horses I like will appreciate the distance and they are Chitengo and I Like It.

Chitengo quickened well last time and over 150m further and the longer run-in she should be a BiPot banker.

Race 2 is another Juvenile Plate and here I’m leaning towards Master Magic, Gift For The Gap and Affranchi. For the Place Accumulator pick any two of those.

Race 3 is a Maiden Plate with a number of lightly raced horses and some unraced runners. Therefore try and go wide. My selections are Causeway Cruiser, Chijmes and The Mackem Slayer.

For the PA put all of these in and for the Pick 6 consider the field. As there are a number of first-timers you don’t need the field and just 11 horses will give you the field.

Race 4 looks to be quite a competitive handicap for fillies and mares over 1160m but I’ve narrowed it down to just two horses for the Place Accumulator – Twelve Oaks, whose merit rating continues to fall, and Celestina.

However, for the Pick 6 it is worth adding in Maple Syrup who will be sporting blinkers for the first time.

Race 5 provides us with a definite PA banker and possible Pick 6 banker in Rebel’s Champ. He is in top form and last time won impressively with 64kg on his back. He was my first call for a ride but I failed to get it. If you don’t want to banker him in the Pick 6, the only other inclusion is Wrecking Ball.

I ride Angel’s Power who at the weights should find it hard to win. He also has some issues but hopefully he has overcome them.

Race 6 is a handicap where Infamous Fox looks hard to beat. He won last time at Greyville off a bad draw and just seems to be getting better and better. He should be a PA banker.

For the Pick 6 include Purple Diamond. If you don’t like those two you could easily include the field.

I ride Kings Archer who is coming off a rest. He is course and distance suited but his fitness is unknown.

Race 7 is a very competitive fillies’ race and you can pick three of Invincible Lady, Make Me Happy, Only To Win, Hafla and I Ain’t Trippin for the PA. For the P6 you might as well take the field.

For the record I tried to get the ride on Invincible Lady but couldn’t. I think she will be better on this track, which I pointed out when she ran last week.

Race 8 is a handicap over 2850m and there are a number of horses who have form that is close together. My selections are Cheat The Cheaters, Tapenzee, my ride Fortune Fella and Tern Unstoned

Pick three for the PA. These long races can be difficult to predict so for the Pick 6 go with all of these and anything else you may like.